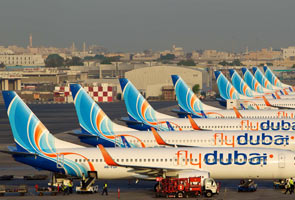 Flydubai flight FZ981 was en route to the Russian city from Dubai and crashed while trying to land.

Emergencies Minister Vladimir Puchkov said the aircraft was scheduled to land at 1.20 a.m. but went down at 3.50 a.m.

“…there were 55 passengers and six crew members on board,” an emergency source told TASS news agency.

There were conflicting reports about the number of dead, with earlier reports putting the toll at 62 with seven crew members.

The plane’s pilot had circled the airport, waiting for the weather to clear before re-attempting to land, but the aircraft’s tail had clipped the runway, the emergencies ministry said.

“The aircraft completely fell apart at the start of the runway,” Oder said.

He said most people on-board were residents of Rostov-on-Don, adding that there were also foreigners among them.

Weather data from the area indicated that winds of 97 kph at the time of the crash and there was light rain.

A storm warning was declared in Rostov-on-Don on Friday.

The plane’s flight path, as tracked by Flight Radar 24, showed the plane made a number of turns near the Rostov-on-Don airport prior to the final landing.

The airport will remain closed until Sunday. At least six flights were delayed, two of which were supposed to leave for St. Petersburg, while the others were due to arrive in Moscow. The inbound flights are getting rerouted to Krasnodar.

Flydubai, an Emirati budget airline with a new fleet of planes that started flying in mid-2009, said: “We are investigating further details and will publish an update once more information is available.”

A day of mourning will be declared in the Rostov region, regional governor Vasily Golubev said.

“Tomorrow (Sunday) will be declared a day of mourning. The government will render assistance to relatives of those killed,” Golubev said.

“An operative and investigative group of the Southern Transport Investigative Department of the Investigative Committee of the Russian Federation has departed for the site of the accident,” the department said.