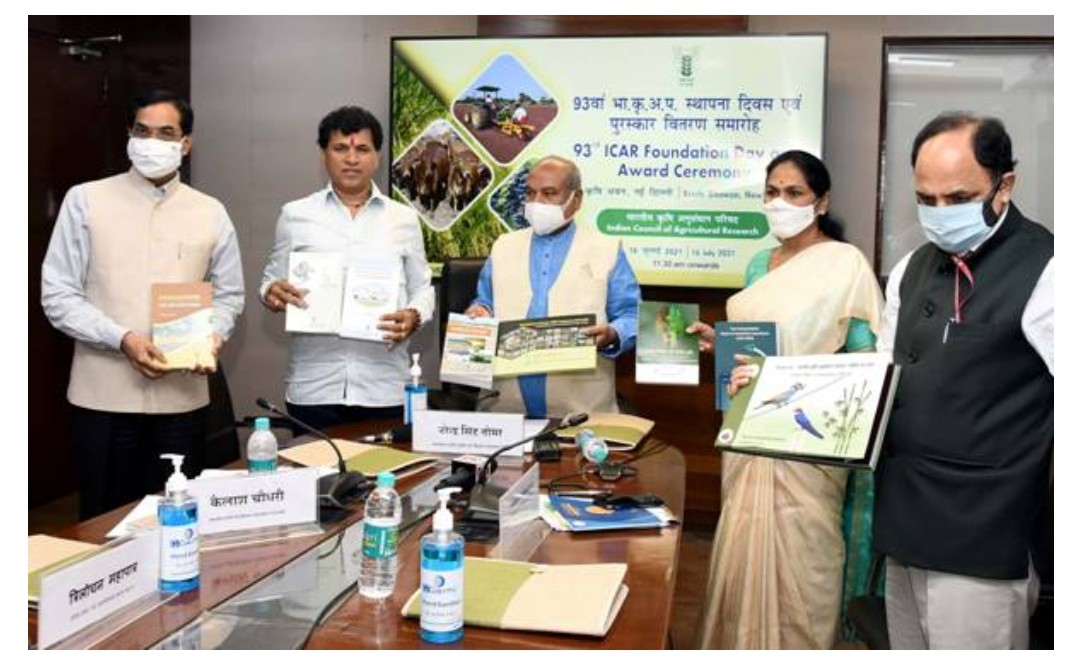 ICAR and Ministry of Railways should work together to plan for easier and fastest transportation of crops: IT Minister Shri Ashwini Vaishnaw

On the occasion of the foundation day, Shri Tomar announced awards in various categories and released the publications of ICAR in the presence of Union Minister for Fisheries, Animal Husbandry and Dairying Shri Parshottam Rupala, Union MoS for Agriculture and Farmers’ Welfare Shri Kailash Choudhary and Ms. Shobha Karandlaje.

Congratulating the ICAR on its achievements, Shri Tomar said that the commendable works carried out in the various fields of agricultural and allied sciences by the Council’s untiring scientists and farmers are a real honour for the country. He emphasized the agricultural sector’s capability to meet the targets of the essential food crops even during the challenging times of COVID-19.

Shri Tomar urged for a collective approach for developing technologies in effectively solving various problems and challenges of the farming community. He applauded the Council’s initiatives to make the country an exporter of various food crops and ensure nutritional security. He also outlined the active participation by more than 400 Krishi Vigyan Kendras in the “Bharat Ka Amrut Mahotsav” programme initiated by the Council to commemorate 75 Years of India’s Independence.

The Union Minister outlined the Central Government’s farmers’-friendly Schemes like Lab-to-Land, Water to every Agricultural land, Per Drop More Crop, etc., that are aimed at accelerating the progress of the agricultural sector and transforming the farm sector of the country. He stressed on promoting integrated farming along with organic and natural farming practices. Shri Tomar emphasized creating a new synergy between research and education to contribute wisely in the process of nation-building. He also emphasized that the New Farm Bills will not only bring revolutionary transformation in the agricultural sector, but also enhance farmers’ livelihood options.

Union Minister Shri Rupala praised the research and innovations done by the ICAR for the benefit of farmers of the country. He said ICAR has done a commendable job to bring research and technology to the farm gate. He also requested ICAR to focus on research for the fisheries sector. He said, just like the soil health card, ICAR can develop a mechanism that helps fish farmers to know about the condition of fishing in particular ocean blocks. He also advised ICAR to develop a digital platform for the animal husbandry and fisheries sector on the model of ‘Kisan Saarathi’.

In his address, Shri Vaishnaw mentioned that with the digital platform ‘Kisan Saarathi, the farmers can interact and avail personalised advisories on agriculture and allied areas directly from the respective scientists of Krishi Vigyan Kendra (KVKs).

Shri Vaishnaw asked the ICAR Scientists to take up research on new technological interventions in the area of transportation of farmer’s crops from their farm gate to warehouses, markets and the places where they want to sell with minimum damage. Union IT Minister assured that Ministry of Electronics and IT and Ministry of Communications will always be ready to provide all necessary support to the Ministry of Agriculture and Farmers Welfare and Ministry of Fisheries, Animal Husbandry and Dairying for the empowerment of farmers. He also mentioned that the Ministry of Railways is making a plan to minimise the time taken for the transportation of crops.

Union Minister of State Shri Kailash Choudhary and Ms. Shobha Karandlaje also congratulated the ICAR and its scientists for enriching Indian agriculture sector through research and innovations. Shri Choudhary also lauded the Council’s hard work to achieve the targets of doubling the farmers’ income by 2022. The Minister accentuated the pivotal role played by the Krishi Vigyan Kendras in disseminating the newer and advanced technologies to distant farmers of the country. Ms. Karandlaje regarded the farmers as the backbone and lifeline of the economy. Citing agricultural extension as an important factor, the Minister stressed on its pivotal role in disseminating information, technologies and advanced advisories to the farmers.

Dr. Trilochan Mohapatra, Secretary (DARE) & Director General (ICAR) underlined the various activities carried out, working styles and achievements of the Council. The various National and International Events organized, Schemes initiated and the signing of Memorandums of Understanding (MoUs) during the last one year were also highlighted in the DG’s address. Dr. Mohapatra stressed on the Council’s commitment to provide higher education in the agricultural arena, carry out new researches, identify the latest domestic varieties, initiating new technological advancements to narrow the gap of lab-to-land and to provide prompt solutions to various problems faced by the farmers.