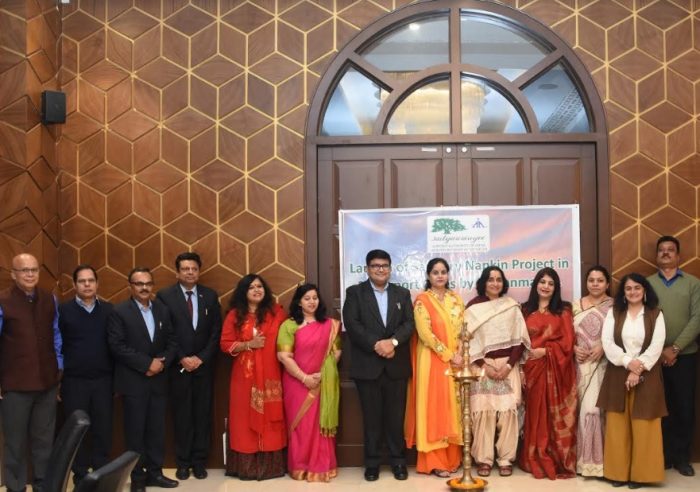 After successful execution of pilot project, Kalyanmayee, Airports Authority of India Women’s Welfare Association formally launched the Sanitary Napkin Usage and Menstrual Hygiene Project on 5th December, 2018. Started earlier this year, thethree-year project includes installation of Sanitary Napkins Vending Machines & Incinerators in schools in 20 cities across the country having AAI Airports and awareness camps in the slum areas. Some of them being Amritsar, Varanasi, Ahmedabad, Bhubaneswar, Patna, Trivandrum and Mangalore. The project was launched by Mrs. Anjali Mohapatra, President, Kalyanmayee in presence of Shri. A.K. Pathak, Member, Planning, AAI, Members of Kalyanmayee and officials of AAI.

The objective of the project is to create awareness about menstrual hygiene practices, and bursting the myths and taboo attached to menstruation. The project provides alternative low cost lab tested napkins as compared to the expensive napkins available in the market. This is done by installation of Sanitary Napkins vending machines in schools in low income areas and by distributing free sanitary napkins in the camps organized in the slum areas. Awareness camps are being organized in slum areas regularlyand in the selected schools where the machines are installed and replenished four times a year to promote their usage.
Till date, 60 vending machines and 60 Incinerators have been installed in 60 schools in 20 cities with 40,265 beneficiaries. Awareness Camps to boost the usage of sanitary napkins have been conducted in 15 schools and benefitting 8020 beneficiaries.

The project focuses on importance of ensuring a healthy and hygienic environment by teaching women about the best ways for disposal of the napkins they are using. To this end, incinerators are installed in selected schools and awareness camps are being organized in the selected schools.
In addition to Sanitary Napkin Project, Kalyanmayee, in association with Asia Oceania Research Organization on Genital Infections and Neoplasia, India (AOGIN), is also conducting Cervical Screening Checkup camps in slum areas at 14 cities for women aged 30-60 years from underprivileged section of society.