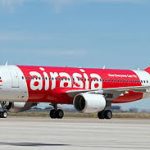 AirAsia Group’s CEO Tony Fernandes on Wednesday said: “Our associate airline in India has grown tremendously, achieving 99 per cent-year growth on passengers carried and a remarkable 104 per cent year-on-year growth in capacity this quarter.”

“We are on target to launch our international routes the minute we achieve 20 aircraft in India next year. We foresee our Indian operations to be very profitable once we start flying regional routes and connecting them to our wide network,” Fernandes said.