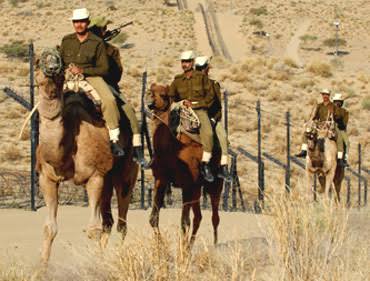 The Indian Army, concerned about the presence of Chinese troops near the Sikkim-Tibet-Bhutan trijunction despite troop disengagement after the Doklam stand-off, is planning a pilot project to introduce both double-humped (Bactrian) and single-humped camels as part of overall measures to check intrusion along the Line of Actual Control (LAC) in Ladakh.

These animals will be trained to patrol and carry heavy loads of ammunition and other supplies. The double-humped camels have capacity to carry between 180-220kg loads compared to about 40 kg carried by mules and ponies, traditionally used by the Indian Army. The double-humped camels can also move faster than mules – up to 10km and 15km on flat track within two hours.

In India, double-humped camels are only found in Ladakh’s Nubra Valley. The Army has already got four dromedary (single-humped) camels to Ladakh from the National Research Centre on Camel in Bikaner.

If the pilot project is a success, then double-humped and single-humped camels will be used by the Indian military organisations in the region and in terrains between the altitude of 12,000 and 15,500 feet.

The Defence Institute of High Altitude Research (DIHAR), a laboratory of the DRDO in Leh has already started research on the load-carrying capacity of the Bactrian camels and will assess how they can be trained for carrying load in such harsh topography and weather conditions.

There are around 200 double-humped camels in Nubra valley in Ladakh. The DIHAR director said, “The Bactrian camels were inducted at DIHAR in February 2017 for a pilot study on their suitability for border patrolling, load-carrying ability, training, and devise management practices, considering conditions in high altitude.”