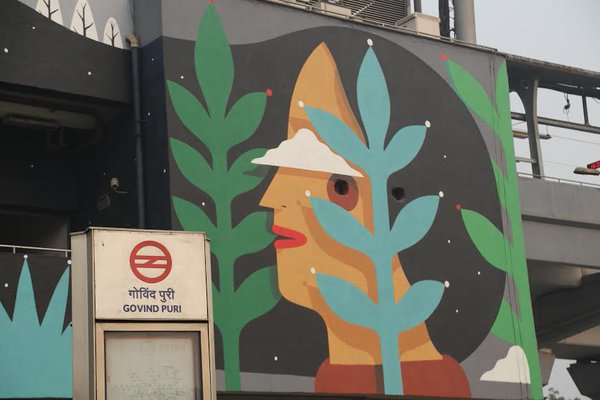 Just like Mumbai, artists have taken over Govindpuri metro Station to change its look.

This initiative has been started by Start India – a non-profit organization. This NGO promotes street art.

Delhi Metro Rail Corporation (DMRC) and artist Agostino Iacurci from Rome came together to transform the face of the station. They painted its boundary walls and bridges with vibrant colours. Artworks like, a girl with long hair, trees, tigers were painted across the interior of the station.

According to a press release by DMRC, the station has been redecorated as part of Delhi Metro’s policy of utilising its premises to promote art and culture. The pilot project began on January 21 and will be completed sometime early this month. Similar projects for other metro stations may be taken up in the days to come.

These artwork on the walls will be maintained by Start India for the next five years and after that it can be repainted.