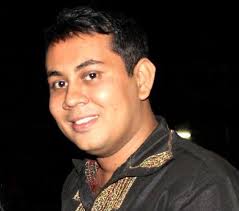 Police on Saturday launched a massive hunt to nab the killers of secular blogger Niloy Chakrabarty Neel whose body bore around 14 hack wounds, four of which were on the neck.

Police registered a case of murder on the complaint of his wife Asha Moni who was present when the 40-year-old blogger was attacked by suspected al-Qaeda linked Islamists at their apartment at North Gorhan in the capital Dhaka,  just after prayers on Friday.

Several teams of investigators have been constituted to hunt down the killers of the blogger, official sources said, adding that they hope to catch them soon.

Neel’s body bore around 14 hack wounds four of which were on the neck. The brutality of the attack was such that some of the cuts sliced through his bones, according to the autopsy report. “He died on the spot because of excessive blood loss from his wounds,” Dr Habibuzzaman Chowdhury, chairman of Dhaka Medical College Hospital s forensic department, said while releasing the autopsy report to the media on Saturday.

As the killing of the blogger was condemned worldwide, Prime Minister Sheikh Hasina warned that her government will not allow politics over religious sentiment. “At least, this can t be done in Bangladesh…We won’t allow this in the country,” she said while speaking at a function organised by Women and Child Affairs Ministry here. “At least our government is not sitting idle….We’re trying to check those with an iron hand,” she added, referring to various incidents of terrorism in recent months.