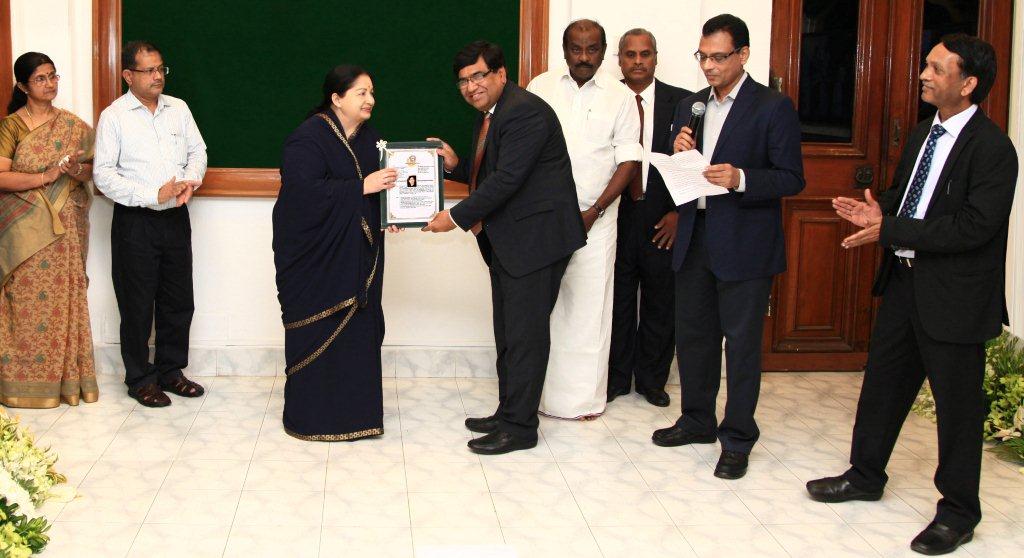 New Delhi, March 1: Reposing confidence in BHEL’s technological and project execution capabilities, the Hon’ble Chief Minister of Tamil Nadu, Selvi J. Jayalalithaa, handed over the Letter of Award (LoA) for setting up of the Main Plant Package for the 2×800 MW Uppur Supercritical Thermal Power Project (TPP) to Sh. Atul Sobti, CMD, BHEL, in Chennai. This was followed by the foundation stone laying ceremony of the project.

Valued at around Rs.5,600 Crore, the order for the main  plant package for the greenfield 2×800 MW Uppur Supercritical Thermal Power Project, located in Ramanathapuram district of Tamil Nadu, has been placed on BHEL by Tamil Nadu Generation and Distribution Corporation (TANGEDCO).

Significantly, this is the second 800 MW rating supercritical order awarded to BHEL from TANGEDCO in less than a month, reinforcing BHEL’s position at the forefront of the power equipment industry in India.

This prestigious order comes close on the heels of the Main Plant Package contract for the 1×800 MW North Chennai Supercritical TPP Stage III in Tamil Nadu, also placed on BHEL by TANGEDCO, last month. Today, BHEL has a significant share of 83% in TANGEDCO’s cumulative coal-based generating capacity, including two 600 MW sets commissioned in 2013 at North Chennai TPP, comprising in-house designed steam turbines, the first of their kind for both BHEL and the state of Tamil Nadu.

BHEL’s scope of work in the current contract involves design, engineering, manufacture, supply, erection, commissioning & civil works for the Main Plant Package. The key equipment for the contract will be manufactured at BHEL’s Trichy, Haridwar, Bhopal, Ranipet, Hyderabad, Jhansi, Thirumayam and Bangalore plants while the company’s Power Sector – Southern Region shall be responsible for civil works and erection/ commissioning of the equipment.

The project is slated to be commissioned by September, 2019 and the power generated from this 1,600 MW power project will help foster growth in Tamil Nadu and provide easy access to electricity to the people of the state.