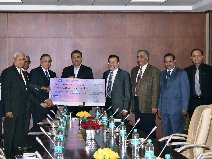 With this, the company has maintained its impeccable track record of earning profits and rewarding investors by paying dividends uninterruptedly for over three decades without a break.

A cheque of Rs.351.40 Crore towards the interim dividend for the year 2012-13 on the equity  (67.72%)  held  by  the  Government of India, was  presented  here  today  to  Mr. Praful Patel,  Hon’ble  Union  Minister  for  Heavy  Industries  and  Public  Enterprises by Mr. B.P. Rao, Chairman and Managing Director, BHEL, in the presence of Mr. M.F. Farooqui, Secretary, Department of Heavy Industry.

Directors on the board of BHEL as well as other senior officials of the Ministry of Heavy Industries & Public Enterprises and BHEL were also present on this occasion.