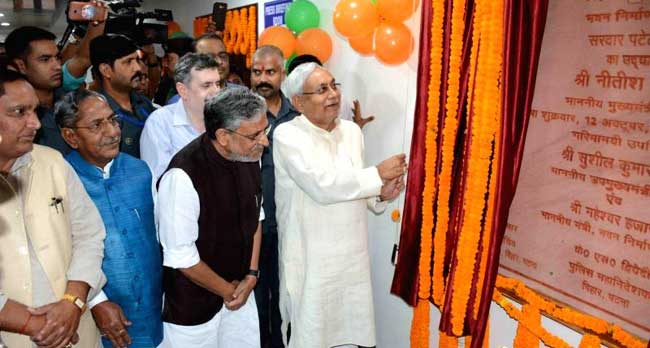 It is also an eco-friendly and green building with a helipad, spread across 6.7 acre. It has been constructed at a cost of Rs 388 crore, and named as Sardar Patel Bhawan — the new address of Bihar Police Headquarters.

“This is first earthquake-resistant building of Bihar, which can withstand earthquakes up to the magnitude 8 on Richter scale,” Nitish Kumar said.

Nitish Kumar said the government is ready to provide a helicopter to the Director General of Police (DGP). “All 12 wings of the police department will function under one roof,” he said.

According to ADG (Police Headquarters) S.K. Singhal, the new police headquarters building will have an emergency control centre, which will serve well in case of a disaster or any other emergency. A helipad has been made on the top floor of the building from where choppers can take off during an emergency.

The building will have solar energy backup of 12 days, which means the building’s systems can function without any electricity disruption.

An ultra-modern forensic science laboratory has also been set up in the building.

There will be five blocks with ultra modern facilities such as a transit hostel, a dormitory, a conventional hall, an auditorium