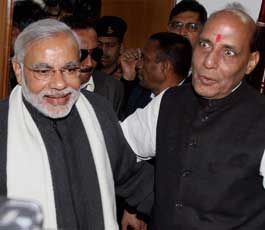 NEW DELHI: Amid calls for a larger role for him, Narendra Modi on Saturday won singular praise from BJP president Rajnath Singh for being the “most popular” chief minister having registered “never before” three consecutive electoral wins for the party in Gujarat.

The BJP national council meeting began here with Singh exhorting the delegates to give a standing ovation to Modi and garlanding him.

“We have never seen the BJP winning three elections under one leadership,” Singh said as Modi stepped forward on the dais to accept plaudits from the delegates.

“It won’t be proper to welcome Modi with mere words. He deserves a good round of applause, a standing ovation,” Singh said.

The BJP chief also lauded chief ministers of Madhya Pradesh and Chhatisgarh Shivraj Singh Chouhan and Raman Singh respectively for leading “successful” governments. He also had words of praise for Goa chief minister Manohar Parrikar, Bihar deputy chief minister Sushilkumar Modi and leader of the BJP legislature party in Punjab, where the party is sharing power with the Akali Dal.

Singh also defended his predecessor Nitin Gadkari, saying the allegations against the former BJP president were completely false and baseless.

Singh accused the UPA government of failure of various counts including in ensuring security, maintaining diplomatic relations, particularly with neighbouring countries, tackling naxalism and handling of the economy and sought to project the BJP as an alternative.

“We haven’t seen a strong leadership in the Congress-led UPA,” the BJP president said.