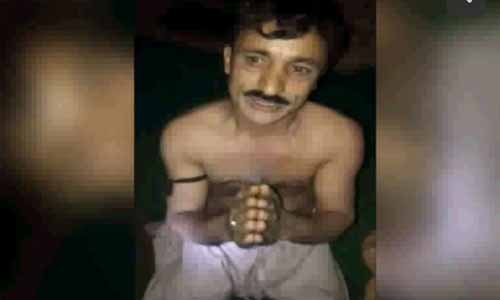 In a shocking incident, BJP worker Mohammad Maqbool Bhat was thrashed and threatened by terrorists in Jammu and Kashmir for being associated with the political party. Times Now has accessed the video where the terrorists can be seen heard threatening the BJP worker.

The BJP worker, hailing from Nadora in Shopian, was abused by terrorists, stripped of his clothes in the freezing cold, beaten and threatened that he will lose his life if he continues to support the Indian Army.

“This time we will spare you, on the condition that you will not move with any Kafir (infidel) Army or political party… If someone motivates you to work for them… say no to them and tell them that Mujahideen are your brothers,” the terrorist is heard saying.

Through the video, the BJP worker is seen shivering and pleading that his life be spared, stating that his family needs him since he is the sole breadwinner in his home.

This comes a month after the District president of the Bharatiya Janata Party in Jammu and Kashmir, Gowhar Hussain Bhat, was abducted and murdered in Shopian.