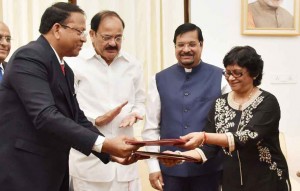 NBCC, a Navratna construction major under the Ministry of Urban Development will execute a US $ 20 million (Rs.130 cr) social housing project in Mauritius. A Memorandum of Understanding (MoU) in this regard was signed here today in the presence of Minister of Urban Development Shri M.Venkaiah Naidu and the visiting Vice-Prime Minister and Minister of Housing and Lands Shri Showkutally Soodhun.

As per the MoU, NBCC will undertake construction of 700 duplex type houses with 50 sq.mt net floor area with two bedrooms, living and dining rooms, kitchen, bathrooms and toilets each in 18 months in Dagotiere and Mare Tabac The visiting dignitary also informed that NBCC will also execute construction of new Supreme Court Building at a cost of US $ 33 million (Rs.220 cr) in Port Louis in 24 months. An agreement has been signed earlier this month in this regard.

Government of India has sanctioned a grant of US $ 353 million for execution of five projects in Mauritius including Metro Express Project, new ENT Hospital and supply of digital tablets to primary school children.

The visiting Mauritius leader thanked India for assisting his country in several fields. Shri Venkaiah Naidu said that bilateral cooperation between the two countries has a strategic dimension and both the countries have an important role to play in ensuring peace and prosperity in the Indian Ocean region. He expressed happiness over commencement of construction of the World Hindi Secretariat and the Chancery Project of Indian High Commission in Mauritius.

Singapore Minister of Trade and Industry Shri S.Iswaran also called on Shri M.Venkaiah Naidu and held wide ranging discussions relating to implementation of new urban missions and development of Amaravathi as the capital of Andhra Pradesh. The two leaders, in particular, discussed about municipal solid waste management and water recycling.