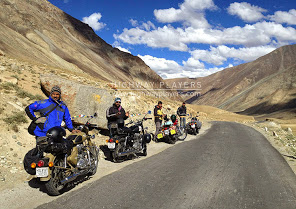 Bikes are many but Bullet from Enfield still makes one gaze at it when it goes roaring on the road.Such is the charisma of this bike.

I remember when i was a teen i would fantasy this dream bike when it went past by me,and that too driven by majority of surds as it suits them to the utmost ,but a well built boy or a man should have this bike only as their choice .Gone are the days when a person used to ride it alone ,now this magnificent piece which gushes your ADREALINE when you drive it has a set of people who are die hard for this and goes on to any terrain to feel this magnificent beast and only a few explore this as it needs guts and adventure to experience this.

For these Gutsy and Adventurous youth’s a club by the name HIGHWAY PLAYERS was formed by Parveen Kumar ,

It’s a Delhi-based club for Royal Enfield (only) bikers. They often go on short rides, discovering the Delhi ramparts. What takes them there? Well, something as simple as a hearty breakfast and the sheer pleasure of cruising the roads on the Bullets they love.

They also go on long rides (pleasant weather’s welcome, but we ride in December’s cold and May’s sun as well), exploring places only a few might have heard of and even fewer would have seen. Their bullets take them home to nature. The machines belong to them and they belong to the roads. These are usually weekend trips. These are times they leave the monotony of life in the big city behind and venture out — to the hills, to the forts and sometimes, to the jungles.

So Guys in Delhi who love adventure and posses a Bullet go join this club for an experience of a lifetime as Life is meant to b enjoyed.