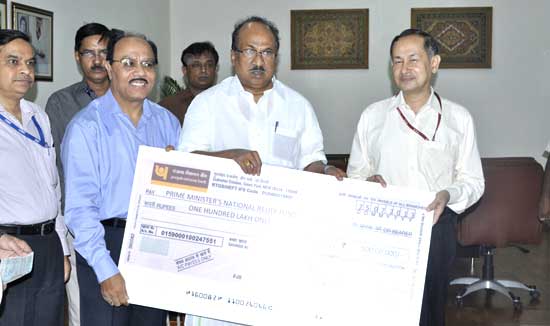 New Delhi,July 27 : In the wake of extensive devastation due to cloud burst and floods in the State of Uttarakhand on 16th June, 2013, responding to the appeal made by the Prime Minister to all citizens to donate generously to the Prime Minister’s National Relief Fund, the Central Warehousing Corporation (CWC) today presented a cheque amounting to Rs.100.00 lakh towards one day’s salary contributed by some of the employees of the Corporation as well as out of its CSR budget.

The cheque was presented to Prof. K.V. Thomas, Minister of State (IC) for Consumer Affairs, Food & Public Distribution on behalf of Prime Minister by B.B. Pattanaik, Managing Director, CWC in the presence of  Sudhir Kumar, Secretary (F&PD) and other senior officials of the Ministry.  Minister lauded the humble contribution made by the employees of the Corporation in supplementing the efforts of the Government in rescue and relief operations as well as massive reconstruction in the State of Uttarakhand.