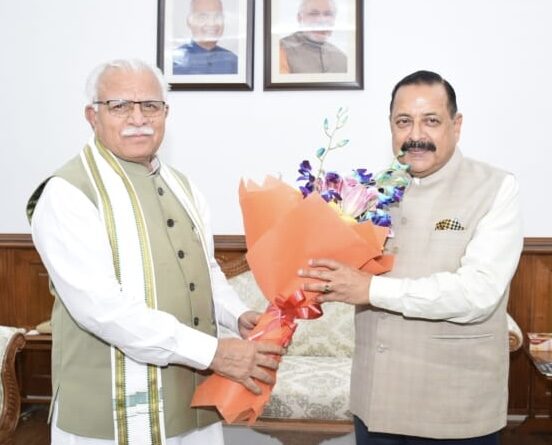 Chief Minister of Haryana Manohar Lal Khattar calls on Union Minister Dr Jitendra Singh and discusses a wide range of State issues related to DoPT, including placement of All India Services officers and other matters

Dr Jitendra Singh acknowledged the serious crunch of officers in Haryana and directed the Secretary, DoPT to take urgent measures to sort out the issues

Manohar Lal Khattar pointed out that there would be severe shortage of IAS officers by the end of this year as 7 Direct Recruits and 7 Promotee Officers will superannuate in 2022. He said, due to Central Deputation of officers and low intake of officers at the State Cadre, the State is facing some governance problems.

Haryana Chief Minister brought to the notice of Dr Jitendra Singh that there are 50 odd departments in the State which need experienced officers at the helm. He said, at present he is managing by assigning 2-3 departments to a single officer, leading to unnecessary and unfeasible workload.

Dr Jitendra Singh, who is also Minister In-charge DoPT, acknowledged the serious crunch of officers in Haryana and directed the Union Secretary, DoPT to give due consideration to all these issues and examine what best can be done.

Dr Jitendra Singh also assured the Chief Minister that cases of extension of service on a 6-month basis will be considered, till the shortage is addressed on a regular basis. He also promised to give due consideration for repatriation of some of the officers from Central Deputation.

The Chief Minister also requested the Union Minister to follow up with the Central Government the progress of some of the other proposals of projects in Haryana. The Union Minister in return said that his office will take due cognizance of this.