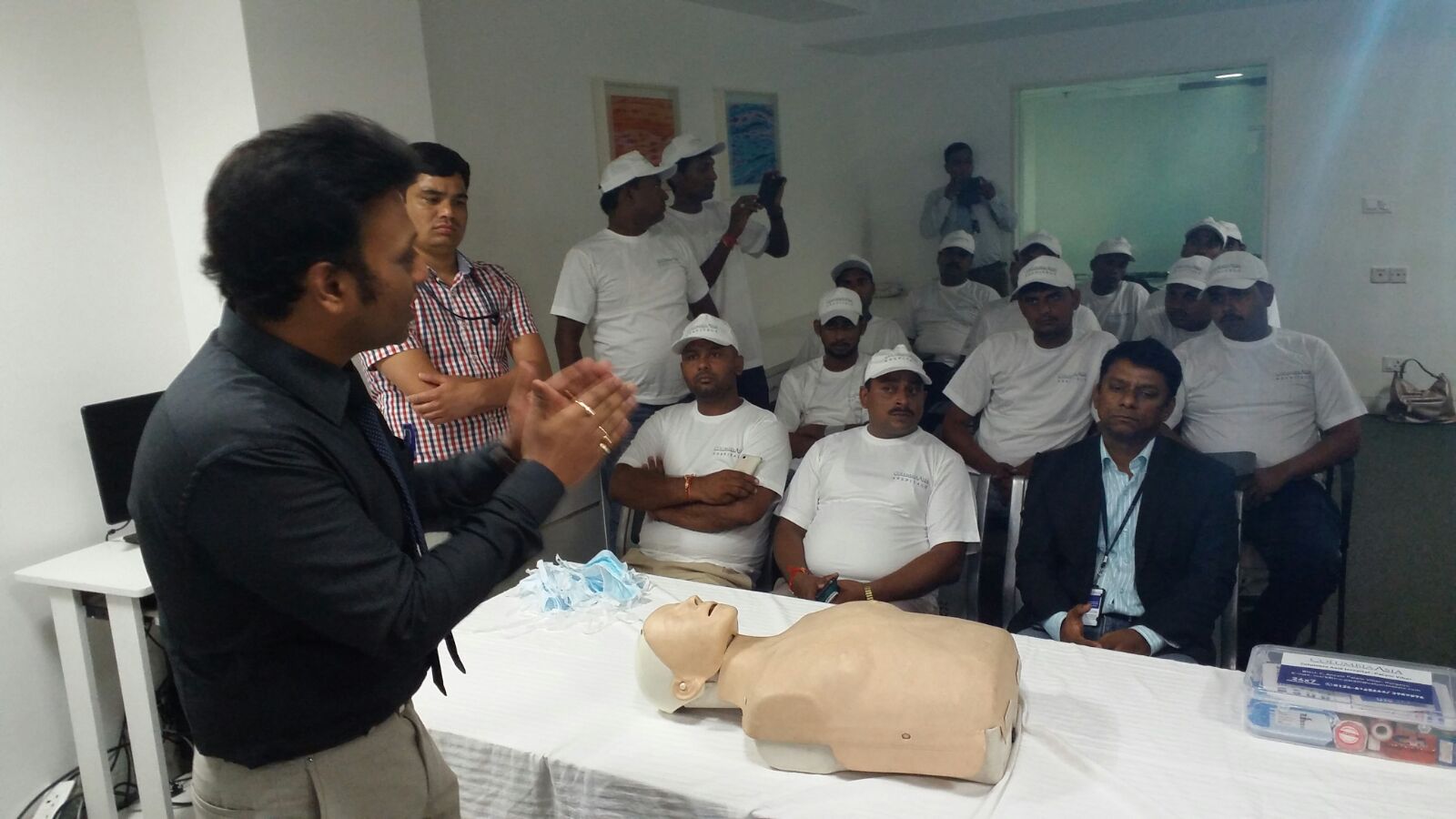 Gurgaon: For a patient in a medical emergency such as cardiac arrest or a road accident, an ambulance driver from a nearby clinic is often the first interface with medical services. However, ambulance drivers in India are hardly equipped with any life saving skills that can make a difference of life and death to some patients.

Aiming to fill this gap and creating first responders on the city’s roads, Columbia Asia Hospital, Palam Vihar (Gurgaon) today organized a first-of-its kind training session to provide Basic Life Saving Skills to ambulance drivers of several of the city’s private hospitals, clinics and nursing homes that cater to a large section of the local population.

Held under a campaign titled “You can save a life too”, the training was conducted with an objective of creating a ‘Good Samaritan Community’ that can use its skills in cases medical emergencies arise.

Dr Taposim Nath , Consultant Emergency Medicine, who was the main speaker at the event, addressed the gathering of 30 drivers along with Emergency Medical Technicians Mr Babban/ Mr Digvijay, and imparted training on administering first aid and handling medical emergencies as a matter of first response.

The training was conducted in line with standards established by American Heart Association Guidelines and included demonstrations by experts. Post the day-long training session, the hospital issued a BLS training certificate to the 30 drivers who attended the session.

“Ideally ambulances should be equipped with an emergency response provider as well as emergency equipment to stabilize a patient or revive him from a near death situation. In most cases, among the first persons to reach the spot of a medical emergency is an ambulance driver from a hospital nearest to the spot. Medical emergencies, on the other hand, involve patients who have suffered a sudden cardiac arrest, stroke or a major bleeding wound that needs immediate emergency intervention involving specialized skills such as cardiopulmonary resuscitation (CPR) or measures to control bleeding. In this situation, having drivers who can intervene with specialized skills can be very useful,” said Dr Taposim Nath, Consultant Emergency Medicine, Columbia Asia Hospital-Gurgaon .

When Adhiraj, a 28-year-old boy, was rushed to a city hospital after meeting with a road accident, he could not be saved due to excessive loss of blood. Doctors said if appropriate measures had been taken on the way to the hospital to control blood loss, the boy could have been saved. Such cases abound in India because of paucity of people who are trained in managing medical emergencies, even in cities with good healthcare facilities such as Gurgaon.

“In certain conditions like a cardiac arrest, patients need immediate emergency help to revive their heart. Many people lose their lives because they fail to get emergency relief. Excessive blood loss, failure to administer CPR, choking, and many such avoidable circumstances end up claiming lives of victims. In emergencies, while reaching to hospital might take a lot of time, ambulance is the first medical supervision that reaches a patient. Accordingly, the ambulance driver becomes the first person from the hospital who can meet the patient. Therefore, training the ambulance drivers for BLS can save many lives or at least make the condition stable enough to reach to the hospital,” said Dr Nath.

Primarily, the motive of BLS is to revive a patient, promote sufficient blood circulation along with providing the patient a clear airway to breath. Notably, BLS do not include the use of drugs or invasive skills or medical equipment.

In India, very few common people are trained in administering CPR to a patient. Not many know the right ways to respond in case a family member or a colleague suffers from a medical emergency. Just knowing how to give first-aid and handle situations wherein a person suffers a cardiac arrest, gets unconscious or suffers giddiness can help save a life. The initial response in the very few minutes is very critical and so knowledge of BLS is absolutely necessary for everybody.

This is why measures such as creating a ‘Good Samaritan Community’ become important.