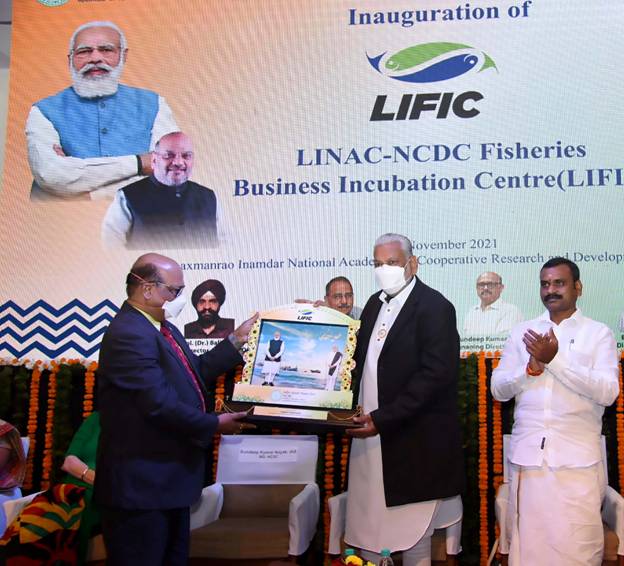 Incubation Unit to be a milestone for future for the fisheries sector being promoted under PMMSY: Minister

Stating that the Centre will serve as a ‘milestone’ in future for the fisheries sector which is being given a big push under the central flagship Pradhan Mantri Matsya Sampada Yojana (PMMSY) launched last year by Prime Minister Narendra Modi, Shri Rupala said that the incubation unit will provide handholding such as training, converting entrepreneurial ideas into business models and doling out seed money to the new as well as existing business entrepreneurs keen to make big in the segment.

To begin with, the National Cooperative Development Corporation (NCDC), an implementing agency for the LIFIC, has identified the first batch of ten incubatees from four states—Bihar, Himachal Pradesh, Gujarat and Maharashtra. Out of them, 6 are from newly-created Fish Farmers Producer Organizations with the support of the financial grant under the PMMSY.

“Unlike in dairy sector, cooperative societies are yet to make their presence felt in the fisheries segment. That is why a separate Ministry of Cooperation has been established so that cooperatives in various sectors including fisheries get a boost and help attain the Prime Minister’s vision of achieving Atmanirbhata (self-reliance). Also, in this direction, we will soon start a drive to provide credit cards on the line of Kisan Credit Cards (KCCs) to the fishermen and those involved in the livestock business as well,” shared the Union Minister.

Minister of State for Fisheries, Animal Husbandry and Dairying Dr L Murugan said that the Centre would ensure that the fisheries sector does not function business as usual but help push the income of the stakeholders. He enlisted various innovative steps taken for the first time including setting up of the fisheries incubation centre under the guidance of the Prime Minister for all round development of the society.

“Fisheries is a sunrise industries in India, growing at 7 percent rate annually. The Prime Minister has set a goal of 22 million tonnes of fish production and export to the tune of Rs one lakh crore by 2025. It is a very tall order to be achieved within next four years given that presently, fish production is 130  lakh tones and export worth Rs 46,000 crore.

“Setting up this first of business incubation centre for fisheries in India is a step in this direction to achieve the ambitious goal. We need to work on promotion of lots of innovation for startups, incentives and encourage cooperatives in the fisheries sector to achieve the targets,” said Shri Jatindra Nath Swain, Union Fisheries Secretary.

Overall, there are around 30,000 cooperatives in the fisheries sector.

“It’s a purely business centre and not merely a technology centre or accelerator,” NCDC MD Sundeep Nayak said about the newly launched Centre. He added this unique initiative shall primarily focus on converting entrepreneurial ideas into business models and then support the launch of business operations. LIFIC shall also handhold the enterprises while negotiating a myriad of market dynamics with the aim of resulting in sustainable revenue generation and business operations in the sector.

One critical input, credit linkage, may be provided to the successful incubators who can avail financial assistance from NCDC.