Yesterday on 21/09/2018 a daylight robbery took place at C-254,Surajmal Vihar,a posh colony in the wee hours,the female robber could be seen clearly making way away with 35,000 cash and jewellery comprising of mangalsutra and a diamond ring both together valued around 1.40 lakhs.

According to Mr.Bharat Sharma the brother-in-law , of the owner of the house, the robbery took place at his sister place,his nephew went to gym closing the door ,his sister and her husband were inside awake at that time but dont know how they felt asleep as if thst women founding the door not locked entered it and sprayed something due to which they might have felt asleep.And then that women siphoned off with cash and gold jewellery.It could be clearly seen who calmly she commits the robbery,without any fear of being caught by police by that act.

The whole incidence was recorded on CCTV and an fir too was filed,but the area police hasn”t been able to nab the culprit ,which should have been prompt as the cctv footage is very clear.

The FIR Copy and CCTV footage is below 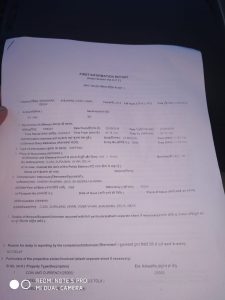