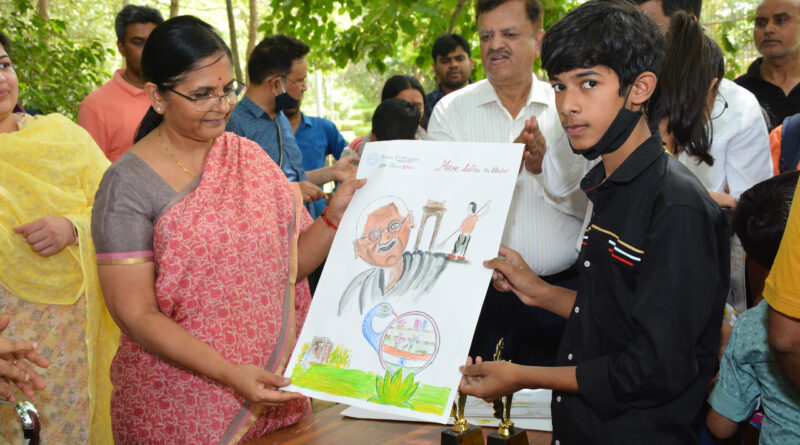 Around 300 children participated enthusiastically in the competition, which was conducted for 2 age categories – 5-10 years & 11-16 years.

The theme is meant to connect the children with development of their Nation and to make them active contributors towards nation-building. The purpose is also to invoke a proud connect with rich cultural history and ideals of freedom struggle in this 75th year of independence so that children and citizens can value the freedom & privileges that we enjoy as citizens of India.

This also tries to encourage children to think innovatively and come up with solutions for the problems they see around them.

Children made very creative and colourful paintings/drawings on the theme ‘Mere Sapno Ka Bharat’. The paintings exhibited that they seek and desire a clean, environmentally prosperous, technologically advanced, fair & just and an egalitarian country which leads the world towards future.  All children were provided with drawing materials and refreshments.

Prize winners were awarded certificates, trophies and gifts. The event was very well received by the children and the residents of the area. Chief Commissioner Shri Surjit Bhujabal and Principal Commissioner Smt. Simmi Jain graced the occasion, interacted with children and gave away the prizes.

A Slogan writing competition for officers & staff on the topic ‘Indirect Taxes’ was organised by Delhi Customs also as part of Iconic Week celebrations of Azadi Ka Amrit Mahotsav. The event was organised as an inter-commissionerate competition to foster collaboration and esprit-de-corps. More than 75 officers participated. Indirect taxes have always been a major source of revenue for the nation, which is utilised for developmental activities of the country. The theme seeks to inspire the officers towards role of indirect taxes in nation-building and proudly proclaim the same before the nation. Winners were felicitated with certificates & trophies.