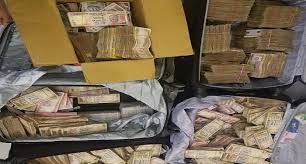 IT DEPARTMENT & CRIME BRANCH SEIZES RS. 3.5 CR. IN OLD NOTES IN A JOINT RAID FROM A KAROL BAGH HOTEL

The seizure follows a string of raids across the country in which alleged unaccounted money has been recovered from various places. The raids are being conducted by the Income Tax department in consonance with the government’s drive to flush out black money in the wake of demonetisation of old Rs 500 and Rs 1000 currency notes.