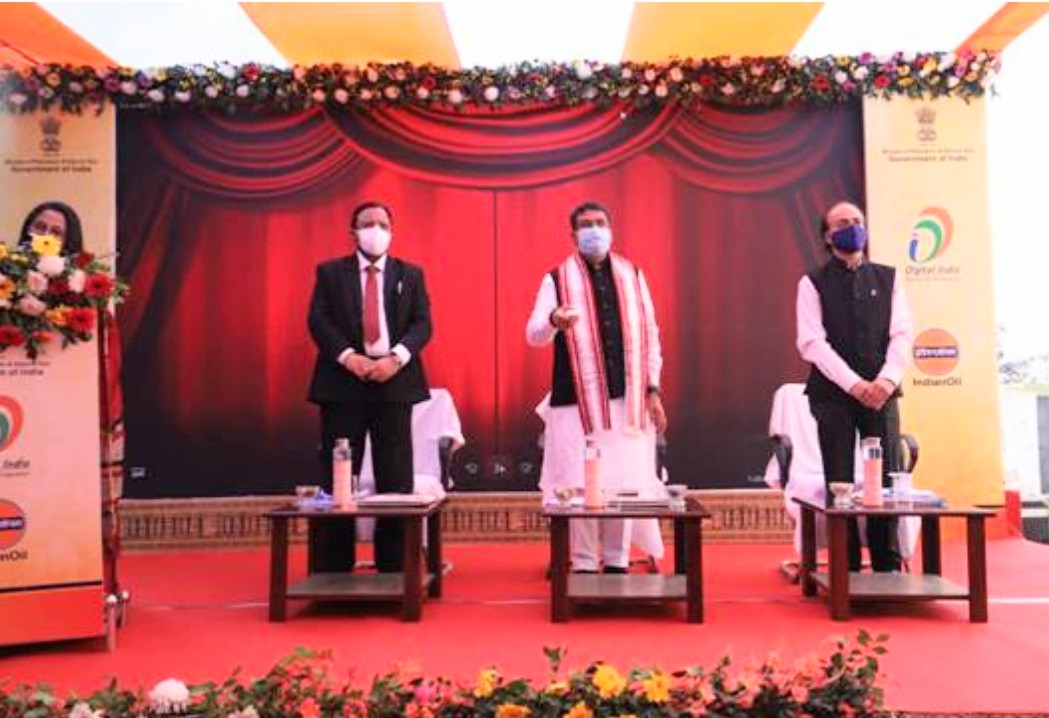 Petroleum and Natural Gas & Steel Minister Shri Dharmendra Pradhan, in an event in Bhubaneswar, today launched Missed Call Facility for LPG consumers, a major step towards government’s efforts to boost ease of living. Indian Oil LPG customers can use single missed call number 8454955555 for refill booking- for all India and for new connection- for Bhubaneshwar City.

Shri Pradhan also rolled out the second phase of world class premium grade petrol (Octane 100), branded as XP100 by Indian Oil. In this second phase, Indian Oil’s branded XP100 was rolled out in seven more cities including Chennai, Bangalore, Hyderabad, Kolkata, Kochi, Indore and Bhubaneswar today. The Minister had launched XP100 and rolled out the first phase a month ago on 01st December, 2020 at select outlets in 10 Indian cities.

Shri Pradhan while speaking on the occasion, said that the Missed call facility is an example of the success of the Digital India mission in the cause of service to the people. He said that the government is using technology to usher in equitable treatment of every Indian in receiving services and improving ease of living for citizens. He said that the service, being launched in Bhubaneswar, will soon be expanded to all over the country. He exhorted the gas agencies and distributors to ensure that the LPG delivery period should be shortened from 1 day to a few hours. He said that the country has travelled a long way in LPG. The LPG connection was made available to about 13 crore people from the year 1955 to 2014, but today it is about to reach 30 crore connections, showing quantum jump and commitment of the government to provide clean fuel. The LPG connection, has really empowered the Indian women, he added.

Minister Pradhan talked  about the power of technology in making the life of common man easy. He lauded the distribution efforts of the OMCs, especially the Delivery boys- the ‘Corona warriors’, who showed guts and sincerity to supply the LPG at the doorsteps of the people without any interruption, even in the time of pandemic. He said that when the whole world, irrespective of its resources or prosperity, suffered due to Corona, India fought back under the leadership of Prime Minister Shri Narendra Modi, who mobilized the whole country, and presented a new model for the world.

Flagging off the dispatch of first load of XP100 from the country’s oldest operating refinery at Digboi, Assam, Shri Pradhan said that this epitomizes the Prime Minister’s vision of Purvodya. He said that XP100 is of world class quality which would enhance the efficiency of High speed cars. This advanced petrol produced from Digboi Refinery will cater to the needs of retail outlets in cities located in country’s North-East region. Digboi has joined the elite group of Mathura and Barauni Refineries by producing XP-100 Petrol using existing infrastructure and secondary processing facilities. This is indeed a commendable achievement, being the oldest Refinery, producing the most advanced petrol available in the country.

Some advantages of missed call refill booking facility over IVRS facility are:

•           No call charges to customers as compared to IVRS calls where normal call rates are applicable.

•           People who are not adept with IVRS or old age customers who face issues in using IVRS facility can opt for refill booking via missed call.