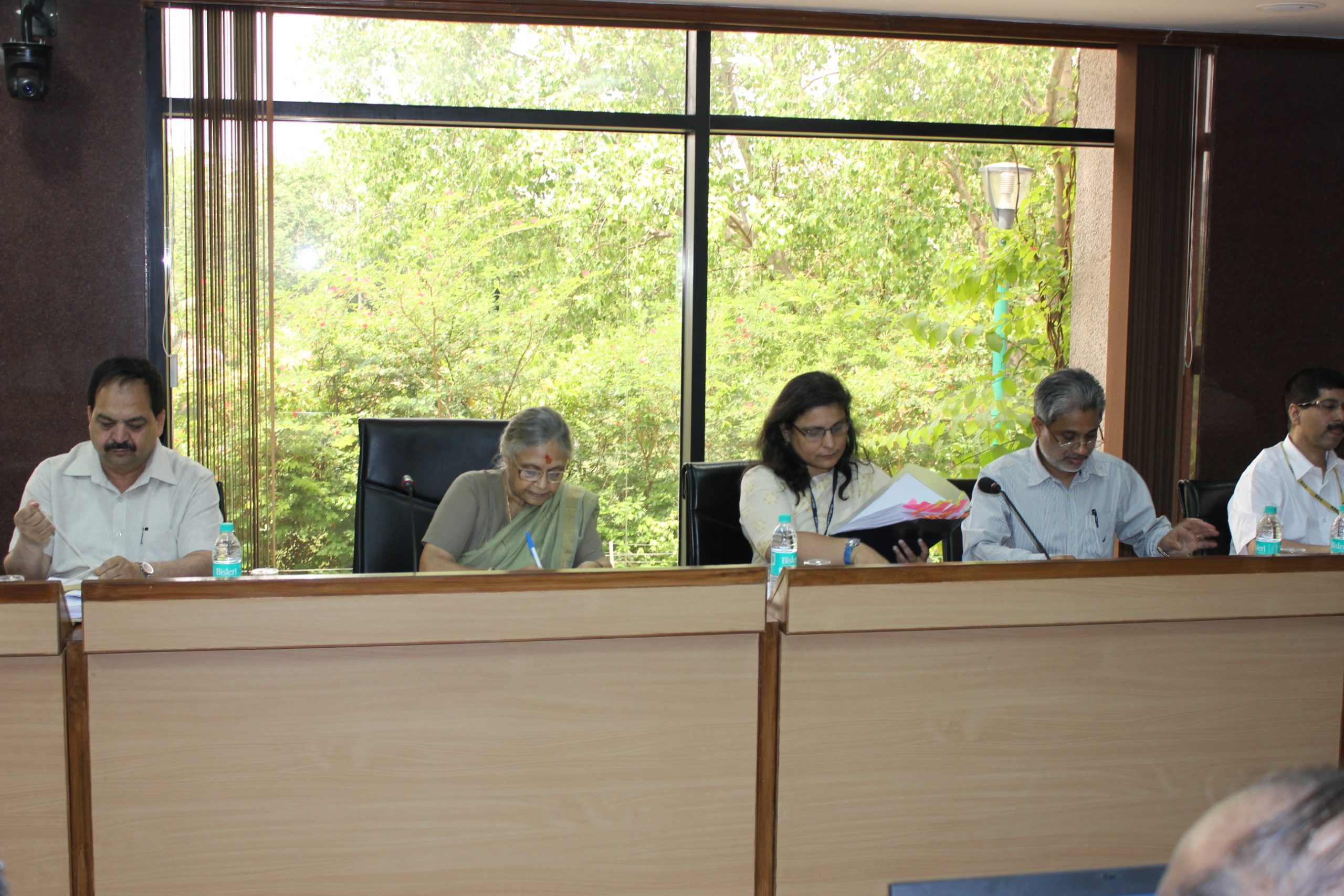 DJB CEO Debashree Mukherjee,presented the budget proposal for the year 2013-14 before the Delhi Jal Board for its approval

While presenting the budget, the CEO focused on the budget estimates for the year 2013-2014, including projected revenues and expenditures, both plan and non plan. She also briefed the members about the revenues and the expenditure of the previous financial year.

Smt. Sheila Dikshit, Chief Minister commended the efforts made by the Board to extend its outreach to the far flung areas of Delhi while confronting the challenges posed by the climatic changes leading to receding levels of underground water .Also the pressures of the ever increasing population of the city of Delhi, are a big challenge before the Board, who holds the responsibility of fulfilling the need of one and all.

Smt. Mukherjee  apprised the Board of DJB’s commitment to serve the citizens by providing to them potable water in the most equitable format  while clearly bearing  in mind the major challenges posed before it  by the continual influx of migrants from the neighbouring states and their demographic  placement in the city of Delhi .She informed the Board about the Water Tariff that has been rationalized by the Board which is aimed at reducing water losses along with Water Conservation efforts  which have ultimately,  in the last three years, enabled DJB to meet its Maintenance and Operation costs .

Touching on the issue of Delhi being dependent on its neighbouring states of Haryana and UP regulating the water flow , Smt. Mukherjee informed the Board that  DJB is currently producing 835 MGD of water to meet the demand of 18 million people in the city of Delhi .

Smt. Mukherjee also informed the Board about the construction and commissioning of a number of underground reservoirs with booster pumping stations to improve the distribution network for serving people in the far flung areas. Each year, she said “200 kms of old pipelines are being replaced and 300 kms of new pipelines are added to cover additional areas”.

The Board was also informed that DJB has 34 Waste Water Treatment Plants at 20 locations with an installed capacity of 544 MGD which will further increase to 628 MGD in 2013-14 after commissioning of Yamuna Vihar, Kondli , Kapashera  and Chilla STPs with a substantial  enhancement in the treatment capacity .

Also, to ensure optimal utilization of all STPs ,DJB  has already undertaken rehabilitation of its critical trunk  sewerage network in different packages. These new Trunk Services have been laid to extend  sewerage facilities to new areas  including  unauthorised colonies, urban villages and some regularised colonies .Most of these works , Smt.  Mukherjee said “have been completed and this will have a positive impact on the capacity utilization of all STPs especially in North and West Delhi”.

Talking of people’s participation  inhouse as well as outside ,Smt. Mukherjee briefed the Board about  how  efforts have been made in DJB  to hone the soft skills of employees and capacity building on various issues to enhance their  productivity for extending better services to consumers .Also highlighting   DJB’s endeavours to engage with various stakeholders for participative governance ,the CEO enlarged upon its efforts to coordinate with various NGOs and RWAs for implementation of schemes and projects.

E-tendering, Smt. Mukherjee said, has been extended to all Divisions for greater competition and transparency for hiring of services .

Smt. Mukherjee told the Board  that under the Water Sector  DJB has undertaken to construct the Munak canal for augmentation of potable water to Delhites, also facilitating commissioning of three newly constructed WTPs at Dwarka ,Okhla and Bawana . To bridge the gap of around 200 MGD in raw water needs , DJB, she said has been pursuing    the matter of construction of three stream storage dams on the River Yamuna .Also ,the construction of raw water link mains from Haiderpur to Wazirabad  has been completed which will facilitate transfer of raw water from one plant to the other.

The Board has approved the construction of 7.7 ML capacity Under Ground Reservoir and Booster Pumping Station in  Y- Block  Mangolpuri along with providing/ laying/ joining of peripheral water mains under its command at a total cost of Rs. 23,83,41,575/- approx. The work is likely to be completed in 18 months. After the completion of project, the residents of Sultanpuri resettlement colony and its adjoining areas will be benefited.

The Board was apprised by Smt.Mukherjee about the systemic improvements in the existing water supply systems for general distribution of potable water and also providing water supply to the urban poor in unauthorised colonies. Three pilot projects under the PPP model of management have been initiated  with an ultimate objective to transform the system from the  existing intermittent water supply to a continuous supply  of water 24 hours a day ,thus bringing down the Non Revenue Water Supply .The areas under the said  scheme are Malviya Nagar ,Nangloi and Mehrauli –Vasant Vihar colonies.

Since the water availability ,harvesting and distribution  go hand in hand with efforts for the sewage management ,Smt. Mukherjee briefed the Board about DJB’s effort  to augment the Sewage Treatment Capacity of 34 Waste water treatment plants at 20 locations along with their modernisation and refurbishment at various locations .Significant among these efforts, the CEO said, are improving  conveyance efficiency of the sewer network and for enhancing  treatment effectiveness  leading to improved water quality .

The Board approved the total Plan Budget of Rs. 1665.00 crore for the Water and Sewerage Sectors. The Water Sector gets Rs.890.20 crore and for the Sewerage sector the budget put aside is Rs.774.80 crore .

In the Water Sector, primary focus areas shall be extending the water network to planned and unplanned areas, minimising water leakages ,full domestic metering and augmentation of production capacity .

In line with DJB’s efforts to bring down Non Revenue Water and to bring about accountability in water usage, the Board approved maintenance and installation of 15mm size  AMR/Non AMR water meters conforming to IS: 779:1994 or ISO 4064:1993 standard with ISI/EEC/OIML/MID certification mark with protection class of IP68 complete in all respect in Delhi at a total cost of Rs. 173,68,85,000 approx. for 7 years. The Board also approved for installation and maintenance for 4 years of AMR water meter with remote reading device capable of transmitting data through GPS technology for various sizes of bulk water connections conforming  to ISO 4064:1993 standard certification mark at a total cost of Rs. 26,81,46,125 approx.

The CEO informed the Board about the preparedness of DJB to face the expected water demand of consumers in the city .To make water supply to consumers more efficient and equitable while  bearing in mind the feedback from consumers in the last summer  with regard  to infrastructure improvement ,DJB has drafted a renewed Summer Action Plan . A detailed execution plan taking care of complaint redressal and identification of water deficient areas  etc is already in place ,Smt. Mukherjee added .

The budget allocations were applauded by the Board members for the requisite sanctions asked for under various heads. The CEO apprised the Board that for undertaking Plan works in 2013-14, the Govt. has already approved the financial assistance of Rs.1665.00 crores. The project of modernisation, of Chandrawal WTP and its command areas, she said, “has been sanctioned for an amount of Rs.2018 crore as externally aided project under JICA funding .Also an additional sanction of Rs.1896.35 crore has already been received from JnNURM for STPs and Interceptor Sewers.”