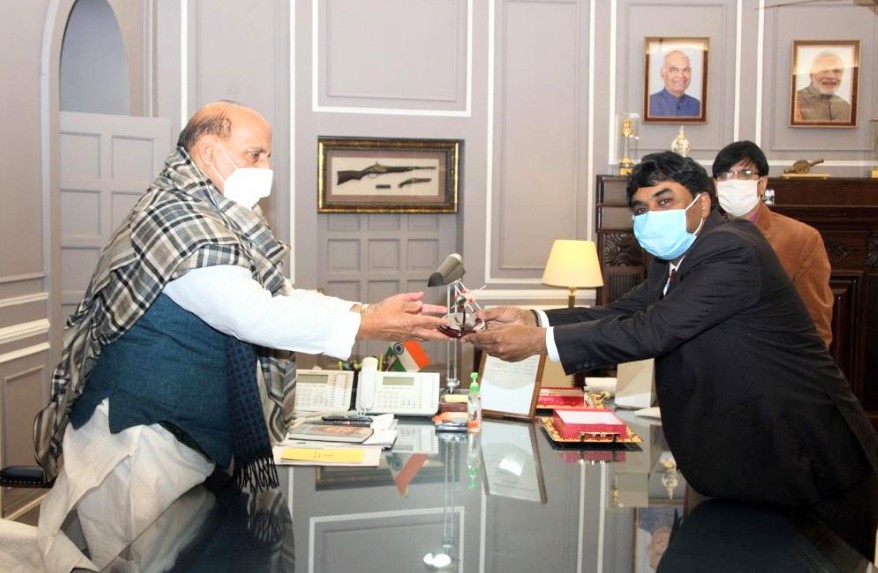 Addressing DRDO fraternity, Chairman DRDO extended warm wishes to DRDO employees and their families. He stated that an eventful year has passed and a new one is about to begin and asked scientists to innovate and create for the Nation. He said that efforts of DRDO have given a quantum jump to India’s self reliance in defence, contributing towards Aatmanirbhar Bharat.

He declared Export as the theme of DRDO for 2021 and mentioned that many products based on DRDO technologies have already been exported by DPSUs and Industry. DRDO develops critical defence technologies and products to meet the requirements of the Indian Armed Forces.

He highlighted the contributions of DRDO during COVID Pandemic and said that nearly 40 DRDO laboratories developed more than 50 technologies and over 100 products on war footing to develop products & technologies for combating COVID 19 pandemic in India. These included PPE kits, Sanitizers, Masks, UV Based disinfection systems, Germi Klean and critical parts of ventilator leading to ventilator manufacturing in the country in a very short span of time. He further said that DRDO has established three dedicated COVID hospitals at Delhi, Patna and Muzaffarpur in a record time for strengthening the medical infrastructure. In addition, Mobile Virology Research and Diagnostics Laboratory (MVRDL) were developed to speed-up the COVID-19 screening and R&D activities at various locations for strengthening the COVID testing capabilities.

He mentioned that new policies and procedures were launched for increasing the efficiency and ease of engagement with various stakeholders in the development. DRDO has also taken major steps for further strengthening its base for taking up technological challenges for the defence systems development and will continue to strive for the best in defence technology and ensure the system development in the shortest time.

While congratulating DRDO Scientists and all other personnel who worked in close coordination with the Armed Forces for user trials, he set many targets for them. He talked about the flagship programmes of DRDO such as Hypersonic Cruise Missile, Advanced Medium Combat Aircraft (AMCA), New Generation MBT, Unmanned Combat Aerial Vehicle, Enhanced AEW&CS, LCA MK II and many other systems.

In his speech, he called upon DRDO scientists to focus on next generation needs including cyber security, space and artificial intelligence.

The immense potential available in DRDO has been a catalyst for the development of industries in defence manufacturing sector.

He highlighted that the academic institutes, R&D organizations and industry need to work together on the advanced and futuristic technologies to make India self-reliant in defence sector. He mentioned that a number of SMEs and MSMEs are supplying small components to subsystems for all DRDO projects and have been nurtured by DRDO. Now they have become partners in all new developments. He stated that DRDO conducted a competition “Dare to Dream” for Startups and very enthusiastic response have been received. He further added that at least 30 Startups should be supported every year to develop innovative products for our forces.

He said that DRDO should make efforts towards strengthening long term ties with the Academia and aim to leverage the academic expertise available in the country and increase the synergy with them. DRDO should concentrate on applied research and translational research and then make prototypes from the applied research. He further said, that the industry should be in a position to adopt these technologies and have necessary infrastructure, and scale these up to market with sustained quality.

He underlined the need to focus on documentation and productionisation for faster induction and said that many new initiatives towards enabling the industry and empowering youth for Defence R&D will be taken by DRDO.

Chairman DRDO also launched an Online Industry Partner Registration Module to simplify the process of vendor registration. He released the DRDO Monograph on “Issues on Development of Communication Technology using Orbiting Satellites” and also the Environmental Safety Manual and Guidelines for Disposal of Life Expired Chemicals and Gases at DRDO Laboratories.