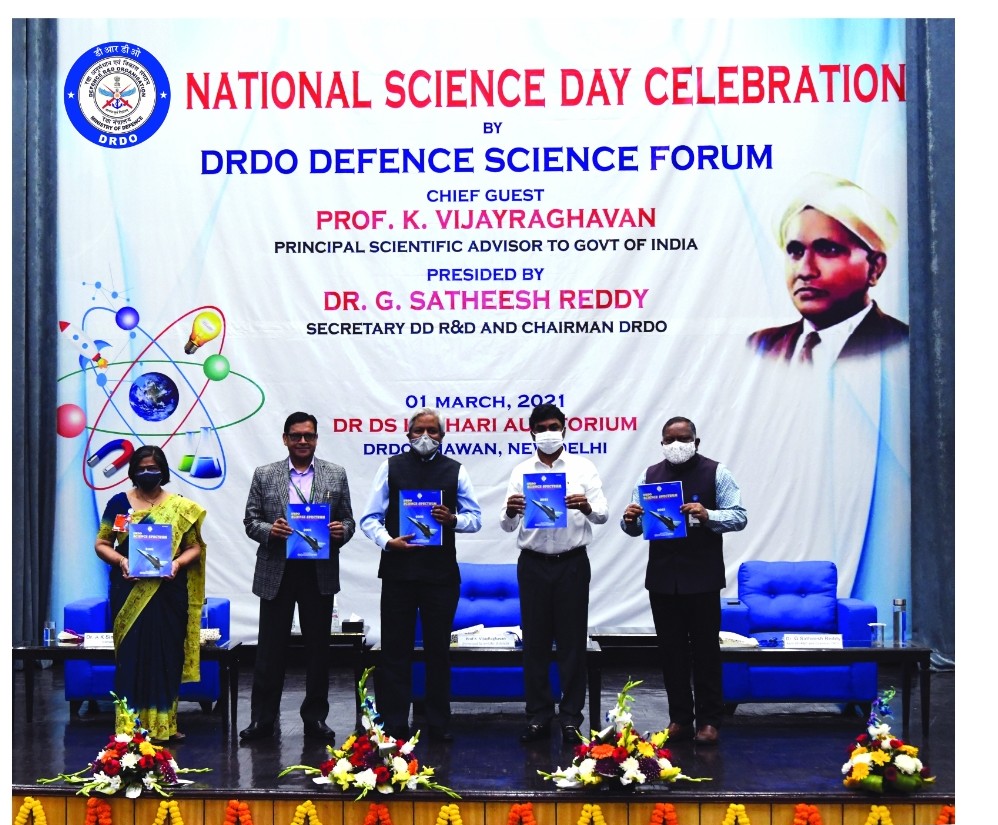 National Science Day 2021 was celebrated in Defence Research & Development Organisation, DRDO Head Quarter in New Delhi today on 1st March, 2021 with great fervour. To mark the occasion, a special function was organised by Defence Science Forum. Principal Scientific Advisor to Government of India, Prof K VijayRaghavan was the Chief Guest on the occasion. The function was presided over by Secretary DDR&D and Chairman DRDO Dr G Satheesh Reddy.

In his keynote address, Prof VijayRaghavan said that there is a significant amount of work being done by DRDO that epitomizes quality science. He appreciated the speed and quality of innovations by DRDO during the pandemic. He stated that “we are a design driven world, and our two major goals should be designing and manufacturing indigenously”. He further said that in this new era of partnership between DRDO and industry, we should have the capability to buy local and make local.

Secretary DD R&D and Chairman DRDO in his address congratulated the scientific community for its ongoing quest to achieve excellence and self reliance. He emphasised the need to concentrate on science in laboratories and academic institutes to come out with state of art technologies. He highlighted the requirement for a focus group in each DRDO laboratory to work on future technologies. Dr G Satheesh Reddy further said that it is very important for any nation to work on the fundamental side of science, for which the universities need to be made stronger, so that the nation can come out with quality products.

National Science Day is celebrated each year on 28 February to commemorate the discovery of “Raman Effect” in 1928 by Sir Chandrasekhara Venkata Raman, which led to the Nobel Prize being awarded to him in the year 1930. The purpose of celebrating this day is to enhance scientific temper, popularization of science and encouraging innovative activities by infusing scientific temperament in the masses and to create a positive scientific research culture.

Defence Science Forum is a platform of DRDO where scientists of various discipline interact to foster fellowship, exchange of ideas with luminaries of different disciplines and feasibility and planning of all inter-disciplinary projects where expert opinion is required.