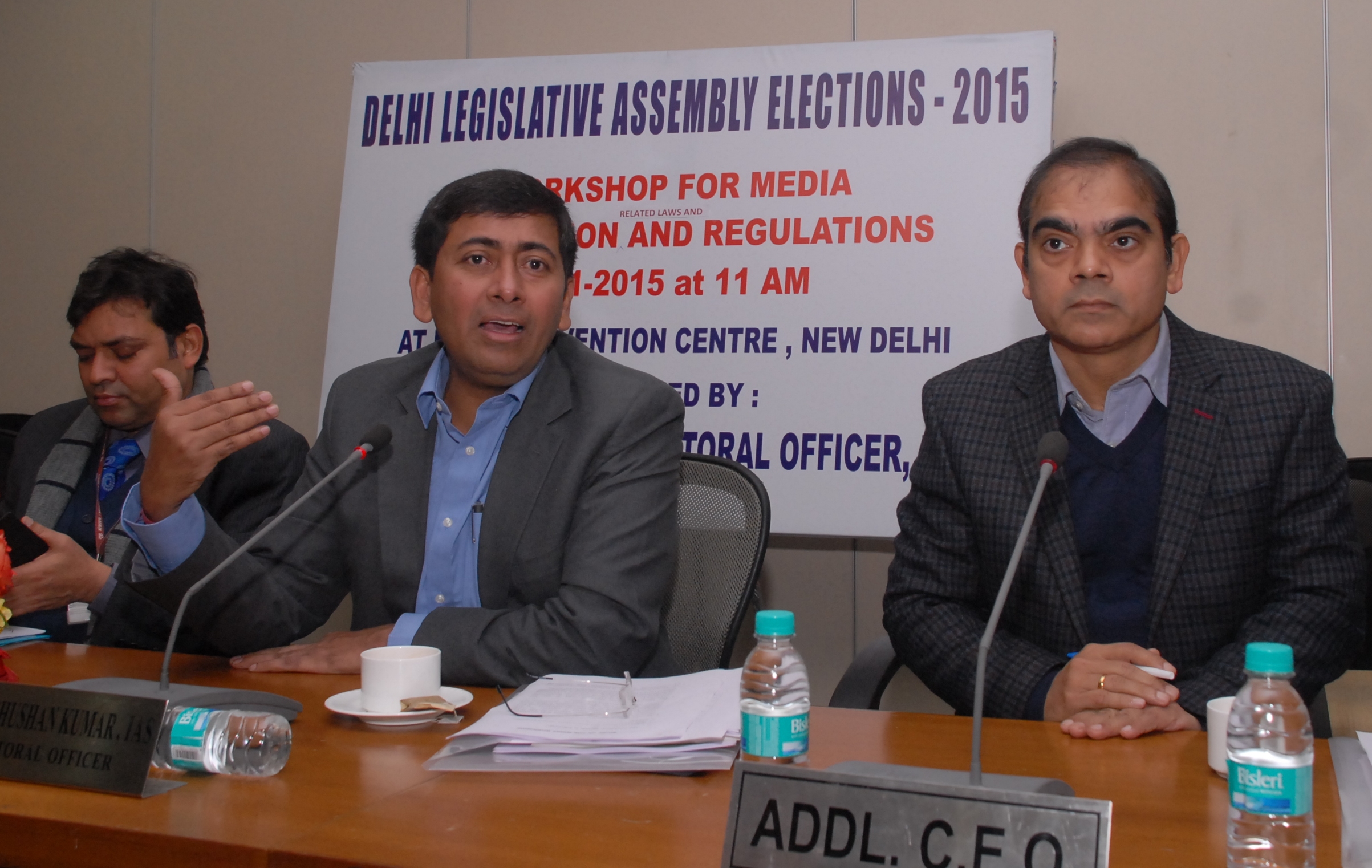 ELECTION OFFICE IS READY TO TACKLE THE MENACE OF PAID NEWS

A Workshop for Heads and Chiefs of print & electronic media and cable operators was organized today i.e. 19th January, 2015 at 11.00 AM in NDMC Convention Centre by the Office of Chief Electoral Officer (CEO), Delhi to sensitize media on the election regulations/legal provisions & instructions relating to media during election period including paid news issues, certification of political advertisements in electronic media.

During Workshop, it was informed that a Media Certification and Monitoring Committee headed by Addl.CEO, Shri Neeraj Bharti, has been formed for viewing, scrutinizing and issuing certificates to the political advertisements in electronic media during the election period. The political parties can submit their applications to this Committee for obtaining certificate to release political advertisements in the electronic media such as TV, Cable Channels, FM Radio, Cinema theatres etc.  At the District level, District Media Certification and Monitoring Committees headed by concerned District Election Officer have been formed. The individual candidate contesting election can seek certification from the District Committee. An appeal against the decision of District or Addl.CEO Level MCMC Committee can be filed before State Level MCMC Committee headed by Chief Electoral Officer of Delhi. All media officers have been advised not to release any kind of political advertisement during election period without getting duly issued certificate by the Committee which is obtained by the concerned political party or candidate.

The media officers were also briefed about the ECI’s instructions on paid news cases. It was informed that any news or analysis appearing in any media (print & electronic) for a price in cash or kind as a consideration shall be construed as paid news. State as well as District Level MCMC Committees have been empowered to decide the cases of paid news on complaint or suo-moto as per procedure defined by ECI and if the Committee decides any news to be paid news, the actual expenditure or notional expenditure based on DIPR rates, as the case may be, shall be included in the election expense account of the candidate irrespective of whether the candidate actually has paid or not paid any amount to the channel/newspaper.

During Delhi Assembly Elections-2013, 54 cases were decided as confirmed paid news cases by the District/State MCMC in print media. The candidates across the different parties were found to be involved in these cases and accordingly expenditure on publishing paid news was included in the candidate expenditure account. During Lok Sabha Elections, 06 cases were finally decided as paid news cases. All the media persons were advised to discourage the practice of paid news during election period.

Attention was also drawn to the Section 126 and 126A of the R.P.Act, 1951 which prohibits the campaign in Electronic Media during the 48 hours ending with conclusion of poll and the exit/opinion poll during the said period.