INDIAN GOVERNANCE SHOULD SERIOUSLY CONSIDER THE RE-OPENING OF DIRECT FLIGHT WHICH PREVIOUSLY EXISTED SAYS AMBASSADOR OF CZECH REPUBLIC TO INDIA H.E MILAN HOVORKA AND MUCH MORE IN AN EXCLUSIVE INTERVIEW WITH TARUN SHARMA

Editor: How are you finding the country INDIA during your stay here.

H.E Milan Hovorka: I have to say that it is extremely rewarding mission ,in my previous capacity as Deputy Minister of industrial trade ,I had number of opportunities to visit different places here and contribute in particular on trade and economic front to the case of strengthening and deepening bilateral relation between the two countries,so when being approached by the President of Czech Republic  ,”I reacted enthusiastic and agreeing as I knew from the very beginning that here ,I would feel a sense of purpose, here I would be able to contribute but also see results of my work and definitely when saying mine I do have in mind that this all was a teamwork and definitely in my diplomatic mission I am counting very much on fellow colleague of mine”.

INDIA is a beautiful country it owes many faces,with a capacity to transform all the differences into positive synergies.I have been visiting so many countries across the globe and I believe that this has been a lot to enhance my capacity to understand all these difference ,whether it’s language differences,habits,experiences,skills so from that these prospective  it is also extremely inspiring the learning process,if you are able to keep your eyes open,what people tells ,if you can reflect their saying in your own decision making processes then it will give you very strong basis in which you as a person contribute quite a lot to handle with success the diplomatic mission.To make it short I feel particularly honored and privileged at the same time I am full of energy and willing to take or any striving bilateral relation between the Czech Republic and INDIA to even a higher ,substantial higher level.

Editor: Czech Republic is a beautiful place in terms of tourism,Hindi movie ROCKSTAR was shot there in 2014 capturing the beauty of Prague.What is your opinion how tourism between two nations can be augmented.

H.E Milan Hovorka: No doubt about that,but I will present it in somewhat broad prospective  to say that for me primarily it is about people to people complex,this is one of my key priorities here,I would like to see substantially more Indians travel and get acquainted with the history and presence of my country of the Czech Republic . I would be happy if I  see more students willing to make studies in the Czech Republic ,I would be willing to have more cultural exchanges and definitely I see as a two way avenue ,likewise I would like to have substantially more travelful  bunchers of mine visiting your country  and here I have to say so many places in INDIA which haven’t been visited ,potential is enormous and sorry if I would be frank to say that potential is not fully used.So people to people contacts and its goes without saying that film making industry whether its Bollywood or Noida Studios not far from our embassy that frankly busy industry plays a very prominent role and I know that Indians they are passionate lovers of cinema and they are keen to follow all places on screen.If  a good movie is taken in Prague or  any other good location of Czech Republic and if these movies I have to share it , my people they are quite sensitive ,they follow the logic of the film,the story,definitely they are also appreciating the scenery ,the places where the movie have been shot and then they start asking question,is there anything I can do to visit those places and that’s definitely why we are here ,that’s why we not only talk about our priority to promote people to people conduct.That is why we also take serious steps to give a real content tourism to transform it into operation level,Now I have in mind that we opened two recently” movie application center” ,we do have it in Mumbai and New Delhi but we would like to have substantially more and want to have it at four locations HYDERABAD,KOLKATA, BENGALURU AND CHENNAI and based on experience we will beginning definitely we will be ready to consider the possibility to reaching out to other parts because I don’t want to see people first visit the embassy here, travel a lot ,time consuming requires huge amount of money instead of people the passport,the document ,travel and then definitely “we are also testing the possibility of re-opening the direct flight  between INDIA and Czech Republic ,we used to have in the past decades ago  and I INDIA  fail to understand why it was possible to have it return and why not but definitely I am not the one who can take the decision my role is to take the way for any eventual company being ready to take a decision  at-least  to consider, seriously consider the possibility and potential of direct civil aviation connection between our two great Nation”.

Editor: To Boost Trade and investment between the two countries what is it that you expect from Indian Governance.

H.E Milan Hovorka: Trade and Economic relations have been traditionally been the backbone of our bi-lateral relation. Out-rightly its also very good performance It is worth of 1.2 billion US$,for me important message that is known as the balanced trade ,we import substantially more from India that you can see in your own statistics because quite often  these  are not  direct import and your export reaching Czech final client they go through other European countries, so this is really quite logic in the globalized wealth economy but I still I see that  there is a potential for the streamlining of economic relations between our two countries operatives. “We have been following carefully all the initiatives taken by the Indian Government ,we perfectly understand the logic behind in particular when it comes to MAKE IN INDIA initiative ,we the Czech Republic we are highly industrialized country ,we have one of the highest  country to the GDP ratio it is 30% so we perfectly understand that why the authorities would like to develop what I would call a real economy transform in INDIA into another global manufacturing hub.Increase industry to GDP ration.We believe that it is not only noble but also commendable objective.And I would also like to add that thanks to strong industrial base strong industrial tradition we have almost been ready to whether to do relatively well consequences of global economic crisis and this is again thanks to industry and our strong ambassador’s fundamental that today the  Czech Republic is one of the fastest European economies more that 4% growth in 2015″, which is unusually robust growth given European standards.Then there are other initiatives why where I believe the Czechs and Indians would gain quiet a lot if they join their efforts ,whether it’s Transport for example there is a new policy concept to be announced very soon to promote Civil Aviation and one of key objective is to put new cities on civil aviation maps through reopening of unused airports or building  green-fields airport,we can perfectly do that ,we do have components that can provide  necessary technology. To reach out to remote areas require to have adequate equipment,”The Czech republic is few of those few countries which  posses the capacity to design and produce small passenger aircraft’s and these aircraft’s are used in neighboring countries ,so why not her in INDIA.Public Transport system ,this is a big issue in INDIA and well by capacity to provide a compact solution with leading edge technologies perfectly fit the program of SMART CITIES here”,and I know that even for the capital city of Delhi and any other metropolitan city in INDIA,this  is a big  issue ,what are the ways and means at the authorities disposal to increase the mobility and this can be done and environment related issues,water treatment,sewage plan again this is an area in which we have been able to gain very specific experience  ,we do have components which do thing globally and we would be perfectly ready to partner with companies here  in India .

“Clean Ganga this is something we have gone through after the changes in the bench of Czechoslovakia and as a result of all structural reforms we have gone through dearth and we have the capacity to tell you what we have done and what do we have at our disposal to be able to meet your own objective .So this is a kind of dialouge ,a kind of  interaction we expect to happen”  .The whole staff related to engineering sector ,I talk about long traditional bilateral partnership between the  two countries ,you have so many ambassadorial facilities capacities using Czech technologies definitely you would find it only logic that these machines would be upgraded again by Czechs that’s why we are receiving on day to day basis companies travelling,visiting talking to their partners with a view to strengthening the existing ties for establishing the new partnerships.So we have number our areas where the two countries can work together and I believe that it has been  crystal clear for what I have been telling you  that definitely “I as a Czech ambassador I am primarily interested in increasing our visibility here The Czech Republic presence in INDIA but I am as well a good trader and I believe there is a two way avenue ,so I am equally interested in having more Indian presence in Czech republic ,we do have a number of  Indian investors doing very business their but the potential is very higher so my intention definitely is to talk to local businesses to promote investment potential of the Czech Republic encourage people to discover or be ready to discover the Czech republic is one of the best places to do business in Europe”. 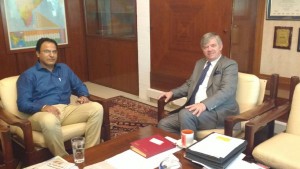 (Ambassador in conversation with our Editor Tarun Sharma)

Editor: what is it the most important aspect ,you want  from current Narendra Modi Government.

H.E Milan Hovorka: I leave it for you I don’t want too. I believe that the most important is capacity to talk to people ,to listen to people ,to be able to mobilize the people and definitely increase awareness ,increase awareness of the potential of the country ,capacity to mobilize  people to able to use the potential,the capacity or the genuine effort to encourage people to do things differently ,which doesn’t necessarily have a negative connotation ,I am almost posing a same question for  myself ,is that something I can do in a more different way ,meaning better way,easier,more faster,well all these societal areas this is something which is so important.And  I tell you frankly if I look into future I see INDIA ,because you have tremendous history all has been done over the  last decades years still I believe that the best is still ahead of your country and the capacity or the  row of politicians I believe is to felicitate,to create environment in which Indian citizens feels comfortable ,who would consider their country to be their home, which doesn’t necessarily prevent you from travelling to go for job abroad but then to see the best you can do is to return back and to capitalize on what you have learnt in the meantime abroad.To create an environment in which people would understand well now we do have an environment in which it is worth of doing business and definitely the results i can see that there are the economy doing very well with more than 7% growth now second consecutive year.A number of measures have been taken to ease of doing business to open up economy for the outer world ,to make the country more attractive for foreigner investors ,to deal with pressing social problems ,in idol world and  real world we know it’s a never ending  story ,we have to keep on pushing ,you have to set objectives for yourself .