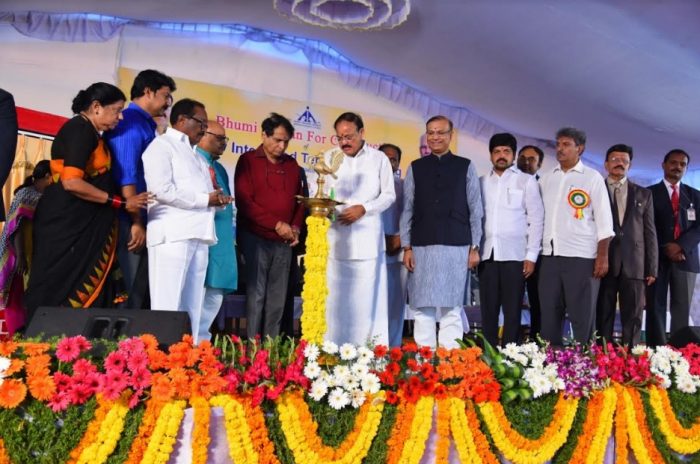 The Foundation Stone for the Construction of New Integrated Terminal Building of Vijayawada Airport was laid by the Vice President of India, M. Venkaiah Naidu on 04th December 2018.
The Ceremony took place in the august presence of Suresh Prabhu, Union Minister of Commerce&Industry and Civil Aviation, Jayant Sinha, Union Minister of State for Civil Aviation and other esteemed dignitaries. The first international flight from Vijayawada to Singapore was also inaugurated the same day.
The New Integrated Terminal Building of Vijayawada Airport will spread over 35000 Sqm and is being developed by the Airports Authority of India(AAI) at the cost of Rs. 611 crores. The airport would be a steel and glass structure with state-of-the-art passenger friendly facilities with peak hour handling capacity of 1200 passengers.
Airports Authority of India(AAI), under the supervision of the Ministry of Civil Aviation (MoCA), is committed towards providing air connectivity across the country. Due to the proactive measures being undertaken by the Government, India is already one of the fastest growing civil aviation markets in the world.
The New Integrated Terminal Building will have 24 Check-in Counters and will be equipped with all modern passenger-friendly facilities. Inspired by the rural-urban blend of Vijayawada’s culture, the exteriors and interiors of the airport have been designed to portray a unique and smart gateway to this region. The local environment and cultural references, as well as the historical art and architecture of the region, are interpreted in a modern way to add grandeur to space.
Vijayawada is a commercial city in the Krishna District of Andhra Pradesh and the second largest after Visakhapatnam. The city is also popularly known by its historic name Bezwada. Vijayawada literally translates to ‘The Place of Victory’. Its prominence as a major trading and business centre has earned it the title of, ‘The Business Capital of Andhra Pradesh’. The new terminal building of the airport will play a pivotal role in the development of Vijayawada city and will enhance the commercial prospects of the region.