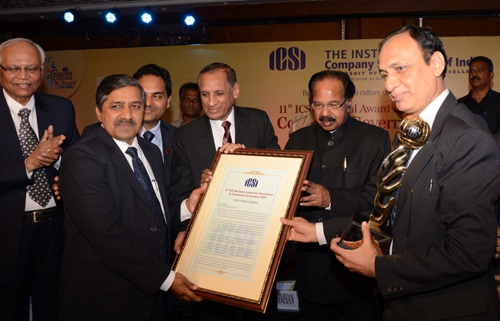 GAIL has institutionalized several processes and procedures to bring transparency and fairness in its transactions with all its stakeholders. GAIL has become an e-enabled company where all processes are conducted through electronic mode which includes e-tendering, e-banking, e-Performance Management System, e-Budgeting System and e-Document Management System.

GAIL (India) Limited is India’s flagship Gas Public Sector Enterprise in the natural gas value chain. It started as a single project company around 27 years back and today it has grown organically to a turnover of around Rs 32,500 Crore and PAT of Rs 3561 crore. Over the years, GAIL has transformed into an integrated energy company with global footprints by following its philosophy ofExcellence With Ethics. Today GAIL is not only the market leader in India Gas transmission, gas marketing and City Gas segments but it has also carved global distinctions for itself. Having started as a gas transmission company during the mid eighties, it has grown organically over the years by building large network of Natural Gas trunk Pipelines covering a length of 9000 km at present. GAIL is further constructing 5000 km of additional pipeline network by 2014-15. GAIL has leveraged its core competence by way of setting-up two LPG Pipelines in the country covering a total length of over 2000 KM, including world’s longest exclusive Liquefied Petroleum Gas (LPG) Transmission Pipeline (Jamnagar-Loni pipeline).

Further, CSR & sustainability development initiatives are accorded high priority in the organizational ethos and attempted to be interwoven in all its business activities. Towardsthis, GAIL has allocated an annual budget of 2% of the previous year’s PAT for CSR activities and constituted a separate sub-committee of the board for CSR and Sustainability.

In the last two decades, GAIL has created a sizeable natural gas market in the country and presently has a capacity to transport 175 MMSCMD of Natural Gas through its Transmission Network. Currently, GAIL’s market share in gas transmission in the country is 72% with plans to double up the existing transportation capacity in the next two to three years.

Besides holding equity in Kochi and Dahej terminals, GAIL, through Ratnagiri Gas & Power Pvt. Ltd., is in the process of commissioning a re-gas terminal at Dabhol (west coast of India) for 5 MMTPA.

GAIL (India) Limited has signed recently a Sales and Purchase Agreement (SPA) for supply of LNG over 20 years with Sabine Pass Liquefaction, LLC, a subsidiary of Cheniere Energy Partners, L.P., USA for supply of 3.5 million tonnes per annum (MTPA) of LNG. GAIL is also planning to develop an LNG re-gas terminal in the east coast of India. This LNG from Sabine Pass shall form a part of the basket for feeding LNG to Dabhol LNG terminal and LNG terminal in the eastern coast in India, in addition to the utilization of capacity of other terminals in India.

GAIL has acquired its first shale gas assets in the USA through its wholly owned US subsidiary GAIL Global (USA) Inc. The subsidiary company, which has opened an office in Houston, has executed definitive agreements with Carrizo Oil & Gas Inc. based in Houston, Texas, to enter into an unincorporated joint venture, under which GAIL Global (USA) Inc. has acquired a 20% interest in Carrizo’s Eagle Ford Shale acreage position. The Joint Venture has 20,200 gross acres, out of which GAIL subsidiary would have 4,040 net acres spread over four counties in Texas.

GAIL has also set up a wholly-owned subsidiary company viz. GAIL Global (Singapore) Pte. Ltd. in Singapore for sourcing LNG, trading of LNG and petrochemicals and overseas investments. An