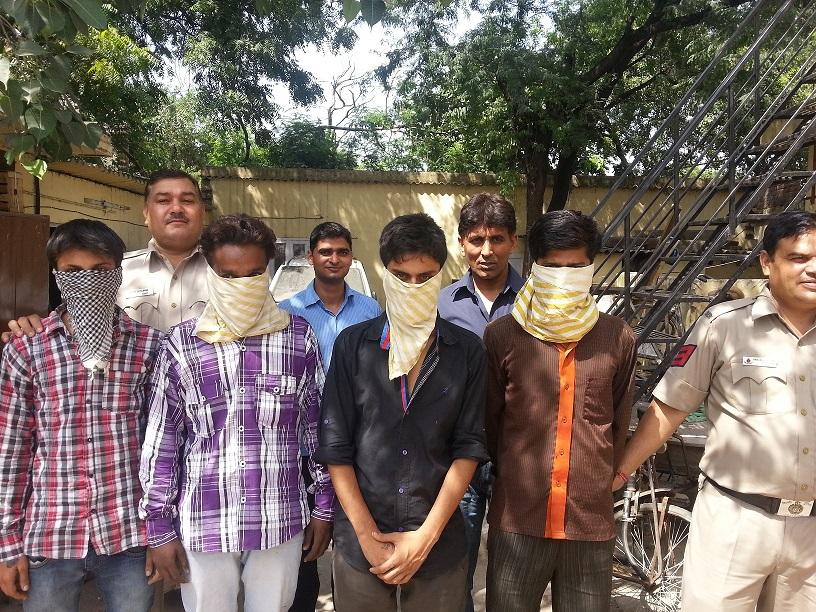 A police team led by SHO/Pul Prahlad Pur, Inspr. Dharam Dev including SI Youdh Bir Singh, SI Kishore Kumar, ASi Dilbagh Singh,HC Naem Ahmed, HC Sarwan, Ct Parveen and Ct. Anuj under over all supervision of ACP/Ambadkar Nagar Sh. Jasvir Malik was working on the Gurtej Laadi Gang since the past fortnight. The gang was suspected to be behind a large number of mobile phone snatching and motorcycle theft cases being reported in the area recently.

On 01-09-2013 information was received that Gurtej Laadi and his gang members would be coming near the Surajkund border. A trap was laid near Okhla Crossing on the Mehrauli Gurgaon Road. At around 4.15 PM the police team intercepted Gurtej Laadi and his three other associates riding on two motor cycles.

On sustained interrogation the four accused persons disclosed involvement in a dozen cases of vehicle theft and mobile phone snatching incidents. Four stolen motorcycles and 6 snatched mobile phones were recovered from them.

All the accused persons are habitual of drug and alcohol abuse. They are fond of motor bikes and high end mobile phones. Hence, they stole bikes and snatched mobile phones to satisfy their needs. Jas Pal Singh @ Honey is a graduate but unemployed. Lalan Singh @ Sonu works as a Guard in private company in Okhla. The gang leader, Gurjit Singh Laadi assists his father in driving a Lancer Car owned by the family as a private taxi in the NCR region.

Further investigation in the case is on. The staff behind the good work is being suitably rewarded.