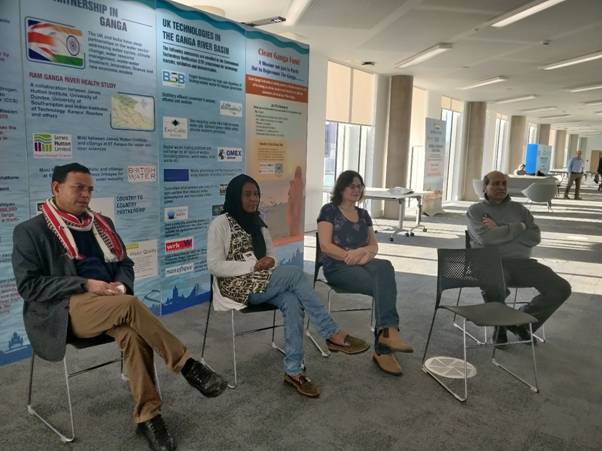 Ganga Connect Exhibition inaugurated in Birmingham at the Royal Birmingham Conservatoire after successful inaugurations at Glasgow and Cardiff, UK

The Ganga Connect Exhibition was inaugurated in Birmingham on 15th November, 2021 at the Royal Birmingham Conservatoire after successful inaugurations at Glasgow and Cardiff, UK. The Ganga Connect Exhibition in Birmingham was inaugurated by Prof. Philip Plowden, Vice Chancellor, Birmingham City University in the presence of eminent people from different organisations and technology innovators. He appreciated the efforts taken by National Mission for Clean Ganga (NMCG) and c-Ganga and was pleased that faculties from school of engineering and sciences will participate in the scientific dialogues. Prof Plowden suggested the team of NMCG and c-Ganga should again visit Birmingham and present the exhibition during the Commonwealth Games 2022.

Dr. ShashankVikram, Honorable Consul General of India in Birmingham, highlighted the efforts and dedication of government officials of NMCG and Ministry of Jal Shakti for their efficient planning and organizing the exhibition in Birmingham and stated that contribution has been extended from Indian communities in Birmingham to the exhibition. In his address, he reiterated the importance of river rejuvenation, and role of modern technologies requiring collaborative efforts from various partners.

The Ganga Connect Exhibition in Birmingham was joined by Mr. D.P. Mathuria, Executive Director (Technical), NMCG. He thanked all the present delegates and honorary representatives from Birmigham for facilitation of the exhibition, and explained the different projects undertaken under the NamamiGange Program with an aim to provide better quality of life and rejuvenation of river Ganga. During his interaction with the delegates present, he shared the success stories, inspirations, and learnings from the past experiences during the journey of NamamiGange Program. The Birmingham exhibition was also visited by various Indian delegates including Mr. Sanmit Ahuja, Expert Member, cGanga; Prof. Sachin S. Gunthe, IIT Madras; Prof.PrasantaSanyal, IISER Kolkata and Dr. Vishal Kapoor, IIT Kanpur.

Post inauguration, a detailed roundtable discussion was organized and attended by nearly 30 participants including industrialists, technology innovators, members of the local government and eminent members of the Indian diaspora. The discussion was led by Mr. D P Mathuria and was moderated by Mr. Sanmit Ahuja. While leading the discussion, Mr. Mathuria explained the governmental perspective and approach towards Ganga rejuvenation and summarized the industrial cluster issues. Dr. ShashankVikram talked about the proactive government approach towards the investment security in the projects related to Ganga River rejuvenation. The role of adopted models such as HAM model, Polluter pays Principle and regulations under the charters for industries related to water sector were also discussed. Mr. Mathuria and Mr. Ahuja addressed the queries from the participants and explained the government priority areas such as wastewater treatment, data and information, agriculture, and others. The discussion was also attended by different industrial experts working on waste-water treatment, hydrogen, biogas, data & information, and advanced engineering. Mr. Ahuja also briefly explained the ETV process and how the companies will benefit globally once they will recognize the process. During discussion, people emphasised  that rejuvenation of Ganga should have social inclusion as a central tenet.