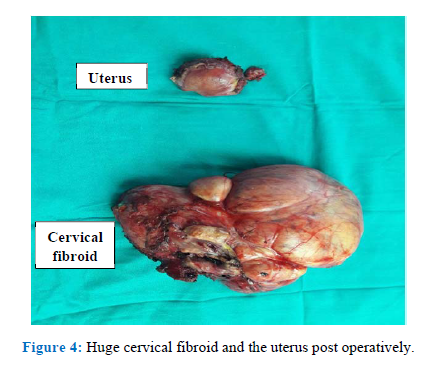 A 47 year old female patient presented at Sir Ganga Ram Hospital in January 2018 with complaints of pain in abdomen and menorrhagia (abnormally high bleeding at menstruation) since last 10 years . On her abdominal examination , a large firm mass was felt corresponding to 34 weeks gravid uterus. ( 34 weeks size of foetus in womb). Patient came with an ultrasound abdomen done in 2009 at an outside centre , for the same complaint and its findings at that time were of a fibroid of 3.3 x 2.3 cms , but no active management was done by the family then . The investigations done at Sir Ganga Ram Hospital revealed that this tumor had now grown to a giant tumor of 23cmx23cmx16 cm , weighing 4 kgs and was occupying the space from depth of the pelvis uptil four inches below breast bone and was adjoining liver.(picture of tumor is attached ) .

According to Dr Debasis Dutta , Senior Consultant , Department of Minimally Invasive Gynaecology , Institute of Obstetrics & Gynaecology , Sir Ganga Ram Hospital , “ Our case is unique in many ways , firstly the huge size of tumor , its rapid growth and its management laparoscopically . More over this case amazed us because inspite of knowing about tumor, no active management was done till date . Due to huge size of the tumor , its precarious position and chances of it being cancerous (high chances of bleeding) made its removal challenging . Being cancereous , tumor had to be removed in total , but at the same time , the blood loss has to be reduced and limited. Therefore, Hybrid Technique was planned in which laparoscopic hysterectomy was planned for minimising the blood loss and laparotomy was performed for total removal of tumor along with uterus owing to high suspicion of malignancy in the mass.

According to Dr Kanika Chopra , Department of Minimally Invasive Gynaecology , Sir Ganga Ram Hospital , “ Due to use of “Hybrid Technique ‘’, there was no injury to adjoining vital organs like bladder , ureter or bowel loops as seen in other similar cases reported previously in literature . The procedure was completed in 3 hours and estimated blood loss was 500 ml. and weight of cervical fibroid was 4 kgs.”

According to Dr Kanika Jain , Department of Minimally Invasive Gynaecology , Sir Ganga Ram Hospital , “Cervical fibroids are rarity as far as location of fibroids in other parts of uterus are concerned. Consequently , surgical management also present as a technical challenge . We successfully managed this case and patient was discharged on 6th day postoperatively.’’