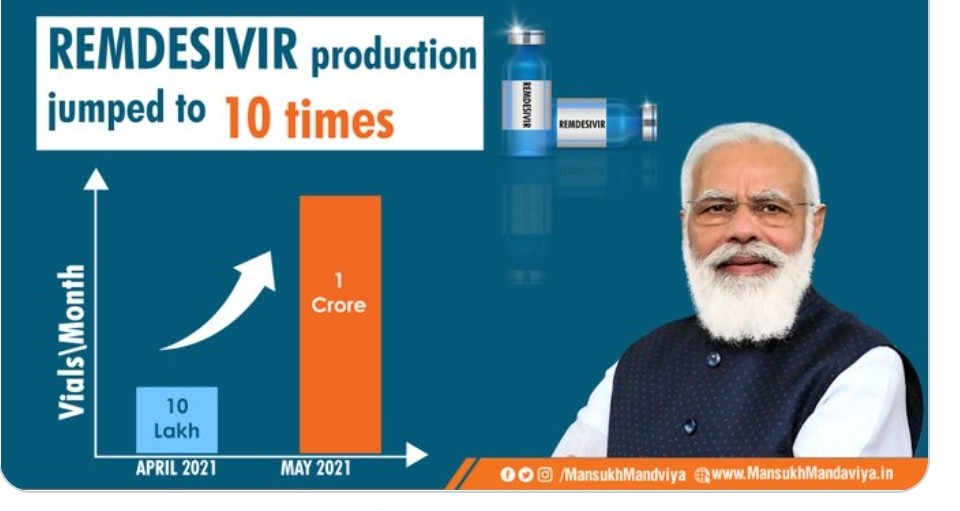 Government decides to discontinue the Central Allocation of Remdesivir

Country has enough Remdesivir, supply is more than demand

Strategic stock of 50 lakhs vials of Remdesivir to be maintained

Minister of State  for Chemicals and Fertilizers Shri Mansukh Mandaviya informed that the production of Remdesivir is ramped up ten times from 33,000 vials/day on 11th April 2021 to 3,50,000 vials/day today under the leadership of Prime Minister Shri Narendra Modi.

The Minister further informed that the Government has also increased the number of plants producing Remdesivir from 20 to 60 plants within a month. Now the country has enough Remdesivir as the supply is much more than the demand, he added.

Shri Mandaviya said that the Government has decided to discontinue the Central Allocation of Remdesivir to States. He has directed the National Pharmaceuticals Pricing Agency and CDSCO to continuously monitor the availability of Remdesivir in the country.

Government of India has also decided to procure 50 lakh vials of Remdesivir to maintain it as a strategic stock for the emergency requirement, he added.