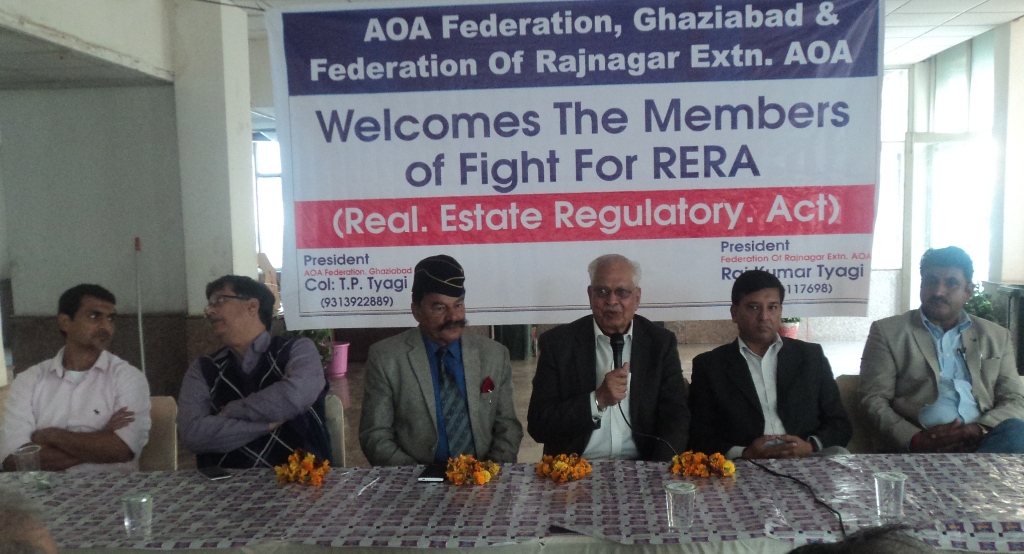 Opposition has written to Prime Minister to expedite RERA

6 Feb 2016, Conference Hall of KDP Grand Sawana, Raj Nagar Extension, Ghaziabad : Today a meeting of Pan India Home Buyers organised by the AOA Federation Ghaziabad and Raj Nagar Extension Federation of AOAs, took place here. The Home Buyers have started a National Movement of Apartment Owners Associations and Federations from all over the Country. It has been given a name that is “FIGHT FOR RERA”. RERA is Real Estate Regulatory Authority. The aim of this Movement is to develop pressure on the Government to pass the RERA Bill on priority par with GST Bill.

The National Convenor of “Fight For RERA” Shri Abhay Upadhyay who came from Kolkota today, said that during the last session of the Parliament the members of this organisation met a number of Parliamentarians including the Urban Development Minister  Hon’ble Vekaiha Naidu who agreed to move the RERA bill subject to opposition from political parties. As a sequel the members of Fight for RERA met the opposition leaders and succeeded in taking letters from Gen Secy of Congress Shri Digvijay Singh and a group of Member of Parliaments in the name of Prime Minister to expedite the RERA Bill (Copies of the letters are attached).

The Chief Mentor of Fight for RERA Lt Gen Satish Bahri  brought out that RERA bill has sufficient inbuilt safe guards to protect the interest of Home Buyers but the highly strong Builders Lobby is against enactment of RERA Bill. We therefore have to build pressure on the Government to give priority to RERA.

The President of the AOA Federation Ghaziabad and Member of the FIGHT for RERA brought out that the real estate business is more than 3 Lakh Crore and affects about 10 Lakh home buyers every year. Since about 17000 projects are in progress in 26 Major Towns of India, the ramifications of RERA are wide spread and hence it has become a matter of Public interest.Therefore, it should be given overriding priority.

The President of the Raj Nagar Extension Federation of AOAs said that if the Government does not enact the RERA bill in the next session of the Parliament, we will be left with no other alternative but to go for either PIL or demonstrations on street.

Real Estate Regulatory Bill once enacted will provide tremendous relief to the Home Buyers since it will virtually close all loop holes through which the Promoters/Builders cheat the home buyers. It is one such bill which requires the Builder to open out all his transactions and plans right in the beginning ; it also forbids him to take away the money from one project to another.