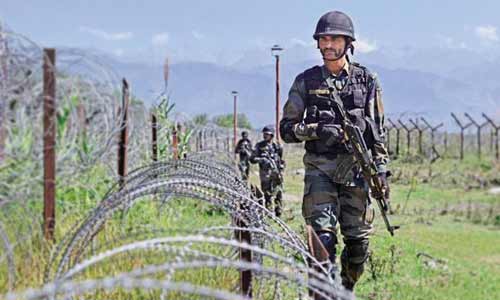 The Union home ministry is set to step up efforts to strengthen border security in 2018 amid a surge in ceasefire violations by Pakistan and frequent terrorist strikes in Jammu and Kashmir.

In 2017, as many as 61 militant attacks were reported across Jammu and Kashmir, the North-East as well as areas where Maoist rebels are active.

However, the decision to strengthen security along India’s border has been prompted by the more than three-fold jump in violations of a ceasefire agreement by Pakistan in 2017. The western neighbour violated ceasefire 771 times along the Line of Control (LoC) in 2017, compared with 228 violations in the previous year.

“With the Doklam stand-off happening this year, these ceasefire violations and Pakistan-orchestrated terror attacks were a third front that kept Indian troops busy. To remove the troops’ focus from Doklam, Pakistan was nudged by China to keep the northern front active. Our troops also responded in equal measure to such violations,” said a senior intelligence official, requesting anonymity.

Defence experts, however, said that the spurt in attacks by militants as well as ceasefire violations were reflective of Pakistan struggling to keep pace with India’s increased military watch.

With the Hizbul Mujahideen and Lashkar-e-Taiba being left without any local commanders in Kashmir, ceasefire violations indicated that Pakistan was pushing its home-grown militants into Kashmir.

“These attacks started because of surgical strikes, which have left Pakistan rattled. Second, these ceasefire violations are a form of cover fire because Pakistan is increasingly trying to push more militants in and we have been eliminating them. Third, with the NIA (National Investigation Agency) raids cutting off funds to stone pelters, Pakistan is now desperately acting out,” said Gaurav Arya, a former Indian army officer.

While the home ministry added that it was also stepping up vigil across all defence establishments, following the attack on a Border Security Force (BSF) camp near the Srinagar airport in Kashmir on 3 October.

“The government has taken various steps to check attacks on defence establishments in the country, which, inter alia, include short-term and long-term security measures, periodic audit of security of all military establishments and measures taken to improve the same, sensitization of all ranks of defence establishments and the response mechanism in the event of any terror attack has been reviewed, coordinated and streamlined,” said a home ministry official, on condition of anonymity.

At the same time, Sashastra Seema Bal (SSB) director general R.K. Mishra said that the paramilitary force would be increasing its strength along the Indo-Bhutan border, just shy of Doklam, the Union home ministry has said that it was keeping a close track of all movements along India’s shared borders with Pakistan, Nepal, China, Bhutan, Myanmar and Bangladesh.

“Border guarding forces have adopted a multi-pronged approach including conduct of regular surveys to carry out vulnerability mapping of borders and prevent any illegal cross-border movement by undertaking regular patrolling, sharing of intelligence and conduct of joint operations, with state as well as central agencies,” minister of state for home affairs Kiren Rijiju said.

At the same time, the home ministry has also been stepping up vigil across the country’s maritime borders. It is setting up an immigration check post along the Mundra Sea Port in Gujarat.

“A meeting was held on 2 July with representatives of the state government of Gujarat regarding creation of marine immigration check posts in Gujarat. A joint team comprising officers of the MHA, Bureau of Immigration and National Informatics Centre visited the existing 06 ICPs (immigration check posts) and 11 check posts and spots to assess their traffic of ships, dhows, availability of physical and technical infrastructure and manpower,” a ministry statement said.