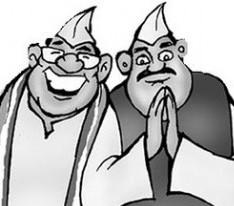 Okay! what our political Neta’s in opposition are demanding may be valid ,but is it the right method to pursue the replies i.e stalling the parliament proceedings.There is a cost involved in the proceedings which nobody but the citizens of INDIA are contributing through their hard earned efforts in form of taxes ,but losing so many precious days by stalling the proceedings of house has made many important decisions go pending.

Why not these so called Neta’s resort to some more meaningful ways of getting the replies to there queries from the ruling government.How can a coin gain its importance if it doesn’t have both sides etched on it.

It seems like the maturity which our respectable political bigwigs should exhibit is lacking somewhere, if we as an outsider perceive the current situation prevailing at parliament proceedings.

When will those days arise when our political system works uninterrupted for the betterment of the Nation.Hope the political bigwigs going through this article understand the gravity of this and work towards a Better and Prosperous INDIA with a zeal of teamwork as no goal is achieved individually and teamwork plays a major role.