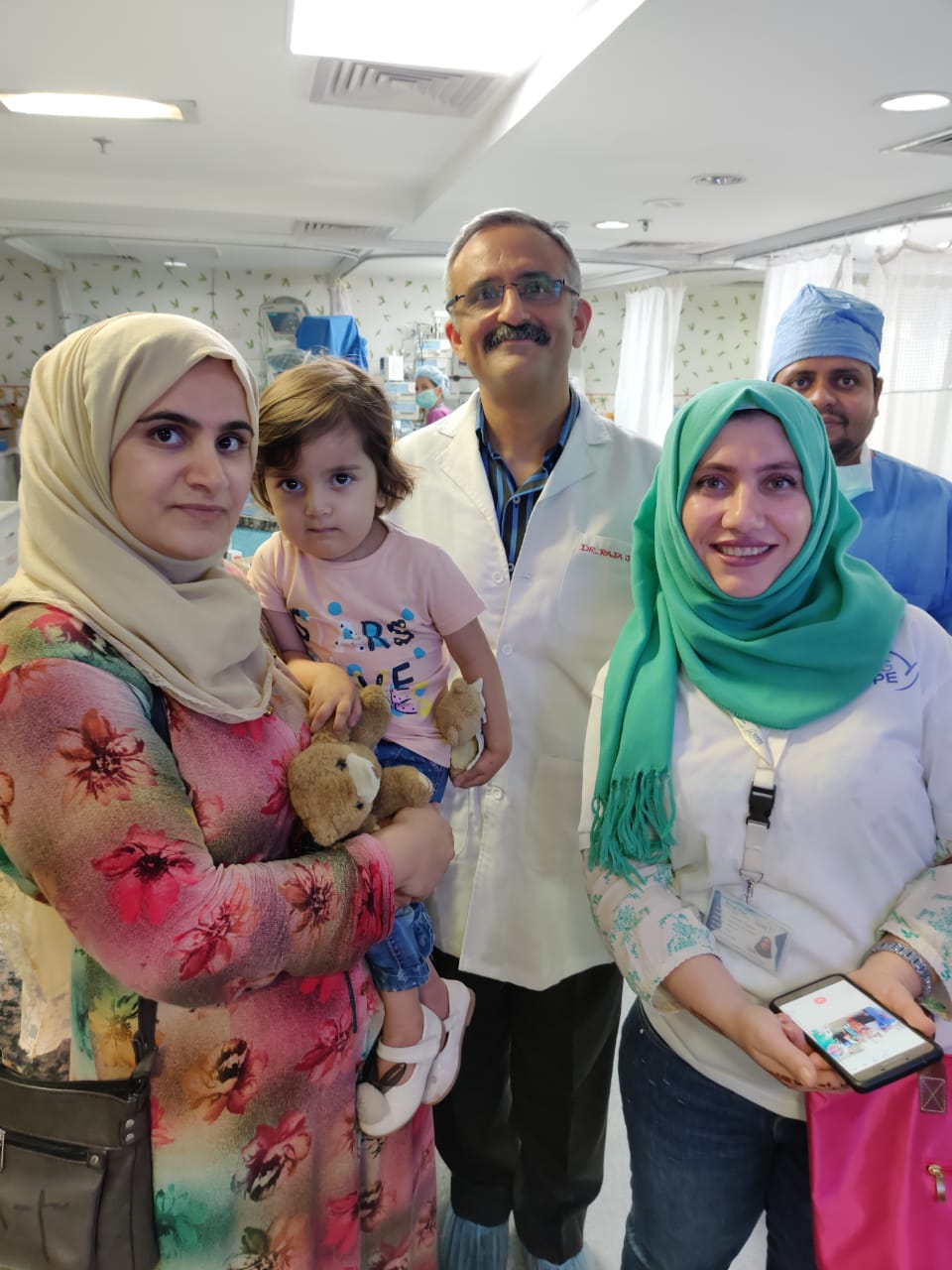 About a fortnight back, doctors from Department of Pediatric Cardiac Sciences, Sir Ganga Ram Hospital were contacted by two NGO’s working in war torn area of Erbil, the capital city of Iraqi Kurdistan. These NGO’s, “Bring Hope Humanitarian Foundation”(BHHF) based in Erbil, Iraq and Diya India Foundation, based in Delhi  were trying to help two critically ill children who were living in desperate conditions in an internally displaced person’s camp at Erbil, Iraq.  Both the girls, Two years old Staish Azad Khalil and 7 years old Naveen Yaseen were critical and were  suffering from advanced stage of cardiac disease. Due to lack of medical facilities in war torn area of Iraq, these children would not have survived long without medical attention.

These organizations consulted Sir Ganga Ram Hospital in New Delhi, India seeking help for cardiac treatment. The team of pediatric cardiac specialists accepted this challenge & invited these families for the same. BHHF in consultation with Lighthouse cohort, Dubai runs a project named “Hope of heart” with the primary objective to genuinely improve timely & immediate access to tertiary health care services (with special focus on pediatric heart surgeries) for the forgotten children from conflict zones. The project is aligned with permission from Ministry of Health in Erbil.

Upon safe arrival of children & their families, along with a BHHF staff for interpretation services, they were warmly welcomed by the Diya India team who also took care of local transport, food & lodging. Children were evaluated at SGRH and Staish was found to have a seriously malformed heart condition where half of her heart was missing congenitally. Due to which there was shortage of oxygen in her body. She was frequently turning blue and had a hard time breathing properly. After echocardiography & cardiac catheterization studies, it was ensured that a surgical option could be offered. On 22nd of July 2019, Dr. Raja Joshi, Chairman, Pediatric Cardiac Surgery and his team of doctors performed the first stage of complex repair of heart. After the surgery Staish now has safe levels of oxygen in the body and normal breathing. She will come back for second and last stage of surgery after four years. She has been discharged from the hospital on 30th July 2019 and is ready to fly back to Iraq to celebrate the holy festival of Eid with her rest of the family.

Naveen was found to have a medically manageable problem and once therapy was successfully established, she also is deemed fit to fly back home.

Mother of Staish, Paiman Jawhar Mawlood expressed her heartful gratitude on successful treatment in India. “My heart is full of praise for worm hospitality given by Indian people and the hospital”, said Paiman.

“Such collaborative efforts between two international non-profit organizations along with willingness of such state of the art hospital are a welcome step” as reflected in the testimonial by  Mr. Abdulkareem Mohammed Yaseen, Naveen’s Father.

Successful “Pilot” of this project has fuelled the efforts of both BHHF & Diya India Foundation to indentify & facilitate the treatment of these helpless children suffering from congenital heart disease & the vagaries of war.

Sir Ganga Ram Hospital also promises to be instrumental in furthering these selfless efforts & making them more efficient in terms of screening of these children in Erbil & training the interested doctors in due course of time.