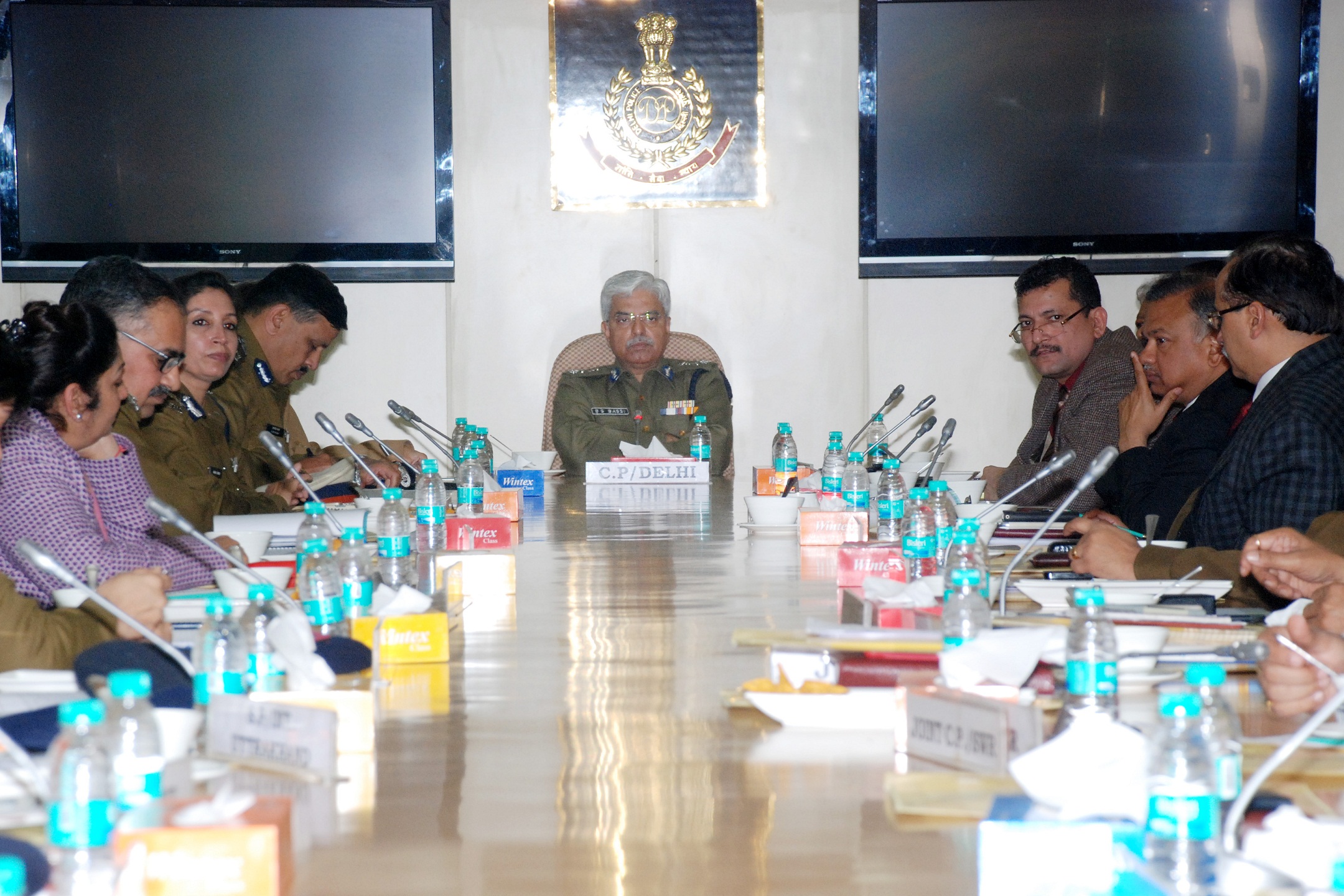 New Delhi: An interstate co-ordination meeting aimed at strengthening cooperation and coordination in order to address various issues related to policing in NCR was held under the chairmanship of Commissioner of Police (CP)/Delhi today at PHQ. The main objective of the meeting was to share terror related intelligence and inputs about various extremist outfits & their designs, besides curbing criminal activities in NCR region and having better coordination on all aspects of policing in view of the coming Republic Day-2015 and Delhi Assembly Elections on 07 February . Senior officers of Delhi Police and their counterparts from Haryana, Punjab, Himachal Pradesh, Uttar Pradesh, Uttrakhand, Rajasthan and J&K attended the meeting.
CP stressed on increasing police presence, intensive and co-ordinate checking at vulnerable points, tenant verification, guest house checking and sensitization of cyber café owners, second-hand car dealers, transporters, property dealers, cycle sellers, chemical dealers and STD/ISTD PCO booth owners, watch on open area for flying of para-glider, micro-light air craft, sharing information, conducting raids and concerted action against Inter-State criminals particularly those involved in heinous offences, repeat offender and gangs.etc. in order to strengthen measures of counter terrorism. Delhi Police requested for sharing of advance information regarding visit of protected persons (PPs) and ensuring that visiting PPs and staff should follow Hon’ble Supreme Courts direction in WP No.25237-2010-Abhay Singh Vs State of UP and others.
CP/Delhi stressed upon using technology with innovative ideas for providing better service to public. He explained the functioning of ‘HIMMAT’ Mobile App launched by Delhi Police on 1st Jan. 2015 for the safety and security of women. He further shared the success of ‘LOST REPORT’ Mobile & Web Application and Police Clearance Certificate. He suggested that if other states wanted to adopt these Apps, all possible assistance would be provided. He further sought cooperation for creation of digitized databank for fingerprints of criminals operating in North India.
The use of sharing of technology in policing, uploading details of Missing/Found persons and UIDBs on Zipnet without loss of time, co-ordination in vehicle checking to curb M.V. theft, co-operation in arrest of wanted/dreaded criminals were especially underlined.
The officers attending the meeting also shared intelligence for checking crime committed by interstate criminals. Issues of human trafficking, missing children and proliferation of fake Indian currency note (FICN) and smuggling of illicit fire arms were discussed.
Traffic issues such as diversion of HTVs and checking of vehicles on borders on 23rd and 25th January 2015, bordering districts to coordinate vehicle checking at unmanned border points in tandem with each other, returning of non-designed commercial goods vehicles from Delhi borders, fixation of “Rear Under Protection Devices” and lateral under protective device and commercial unit vehicles were stressed upon.
The meeting ended with a resolution to have increased co-ordination in policing in the NCR region with emphasis on one to one interaction at all levels and units in order to provide a more secure environment to citizens of Delhi and neighboring areas.