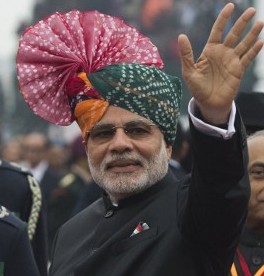 Any Nation citizens are respected globally when its prime leader is respected.India Prime minister NAMO is one of them and not to forget the previous respectable prime minister’s who have also contributed to Nation glory, not only the prime minister should stand apart but should also have an aura of its own.

If we say that Narendra Modi is one of them then it would not be wrong.The recent acceptance of visit by the President of the United States of America ,Mr. Barack Obama to INDIA 66th Republic Day as Chief Guest  and becoming the first president of US to attend the same has left the world’s eye gasping at the INDIA-US burgeoning healthy ties.

Confident,Courteous and Gracious was this down to earth man who offered the tea to the US president during his meeting with him on his visit on 26th the meeting named as Chai pe Charcha.

Modi from the day of his becoming Prime Minister has been active from the day 1 be it launching Jan Dhan Yojna,Beti Padao,Beti Bachao,Make In India the results of which will be strengthening women and making India financially sound which will result in Nation Growth.

Narendra Modi has shut the opposition mouth by his deeds which are really commendable and the days are not so far when the results of this deeds initiated by Narendra Modi in his regime will become a crucial part in the Making of India, A truly economically and financially sound INDIA.

So far are not the days when citizens of INDIA will definitely say ACHHE DIN AA GAYE.