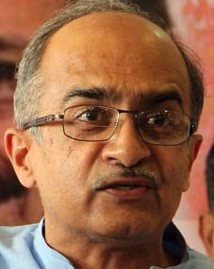 New Delhi: Senior Supreme Court lawyer Prashant Bhushan today alleged that arrested JNUSU President Kanhaiya Kumar has been “falsely implicated” and that he is ready to represent him in court.

“I am ready to represent Kanhaiya Kumar. I am usually busy with Supreme Court and High Court but if the need arises I will represent him because he is a fine student leader who has been falsely implicated,” Bhushan said.

Swaraj Abhiyan, the outfit floated by Bhushan and Yogendra Yadav, has been supporting the students and teachers of the Jawaharlal Nehru University who have been agitating in the wake of Kumar’s arrest over charges of sedition.

Professor Anand Kumar, another leader of the group who also taught in JNU, has slammed the police action as “shameless abuse” of state power to settle political score which is making a “mockery of democracy”.

Kumar was arrested last week in connection with a case of sedition and criminal conspiracy registered over holding of the event at the varsity during which anti-India slogans were alleged to have been raised. Courtesy:PTI