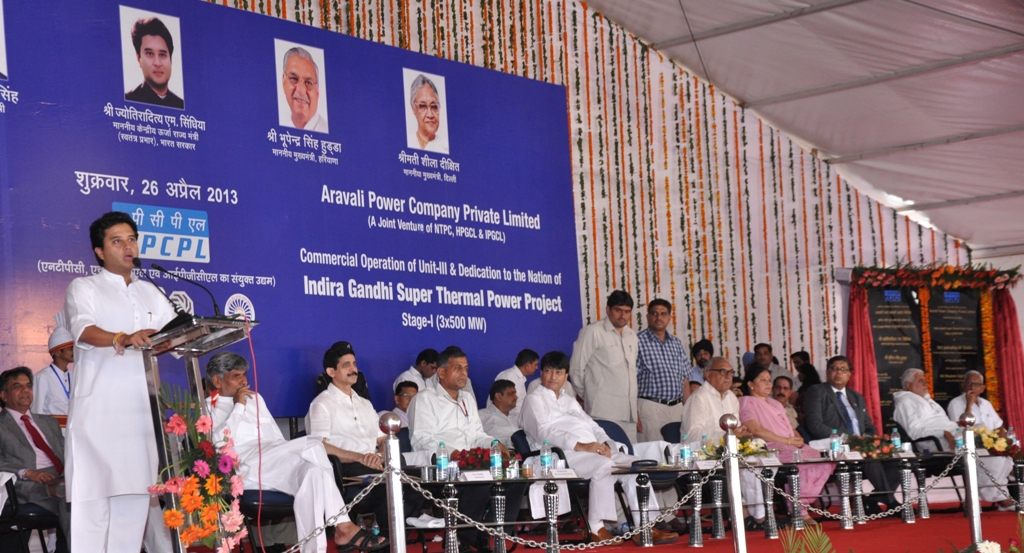 Union Minister of State for Power, Shri Jyotiraditya Scindia today lauded the contribution of NTPC in the power map of India. In his address while declaring the commercial operation of third 500 MW and dedicating the first phase of the Indira Gandhi Super Thermal Power Project at Haryana’s Jharli village in Jhajjar district today, Shri Scindia highlighted that NTPC contributes over 41000MW of the total 228000MW of the installed capacity of the country. He appreciated the efforts of NTPC in commissioning the three units of the station in record time. He assured that all efforts will be made to put two more units of 660MW at Jhajjar so that Haryana transforms itself into to a power surplus state.

Haryana Chief Minister Shri Bhupinder Singh Hooda in his address appreciated NTPC’s efforts in lighting Haryana in more ways than one. Shri Hooda added that NTPC should address various issues related to R&R while undertaking the expansion of the Indira Gandhi Super Thermal Power Project so that the economic conditions of the land oustees are further improved. He thanked the people of Haryana for their selfless support and contribution towards improving the power scenario of the country.

Earlier in his welcome address CMD, NTPC Shri Arup Roy Choudhury mentioned that NTPC has added a capacity of 4170 MW during 2012-13 which is the highest ever capacity addition in a single year.

The project belongs to Aravali Power Company Private Limited — in which NTPC holds 50 per cent equity. The remaining portion is equally shared between Haryana Power Generation Corporation Ltd and Indraprastha Power Generation Company Ltd. Haryana, Delhi and other northern region states are the main beneficiaries of this power project. The plant is 35 km from Jhajjar district of Haryana and 100 km from Delhi. Coal linkage is made from Mahanadi Coalfields Ltd of Odisha and it is transported through Indian railways. Power evacuation from the project takes place through two associated 400 KV double circuit transmission system to Daultabad in Haryana and Mundka in Delhi.

The debt equity ratio of the project is 70:30 and the equity portion has been financed by the promoters and the debt by the Power Finance Corporation. The main plant equipment of boiler and turbine was awarded to the BHEL in July 2007 and the first unit was commissioned on October 31, 2010 in 39 months from the date of investment approval. This has been recognized as the best achieved target for any greenfield project. The second unit was commissioned on November 5th, 2011 and third unit on Nov 7th, 2012.

The project has bagged Greentech Environment Award 2012 for outstanding achievement in environment management. Further, the project has bagged Swarn Shakti Award from NTPC Ltd for best performance in the area of project management (Greenfield Thermal) for the year 2010-11. The project will have a self contained township with all modern amenities such as a 50 bed hospital, school community centre, shopping complex, club and stadium for quality life of the employees and their families.