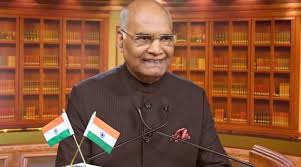 New Delhi, Dec 8 President Ram Nath Kovind will dedicate the first 50 housing units built for displaced Rohingya people during the course of his three-day state visit to Myanmar from December 11, a senior official said on Thursday.

Briefing the media here, Foreign Secretary Vijay Gokhale said that India signed a development programme for Rakhine State in Myanmar late last year which was designed to assist the Myanmar government in Rakhine State to build housing infrastructure for return of displaced persons.

“Two hundred and fifty units were planned for the first phase and by virtual means, President of India will be dedicating the first 50 units to the Myanmar side,” Gokhale said.

“It is something that has been appreciated not just by the government of Myanmar but also by the UN and other agencies.”

Over 730,000 Rohingyas, who are not recognised as citizens by Myanmar, have sought refuge in Bangladesh since August 2017, following a military campaign against the minority community in western Rakhine state.

Giving details of the President’s programme, Gokhale said that after reaching Myanmar’s capital Nay Pyi Taw late on December 10 evening, Kovind will be accorded a ceremonial welcome on December 11 which will be followed by delegation-level talks with Myanmar President U Win Myint, a meeting with State Counsellor Aung San Suu Kyi and signing of agreements.

On December 12, Kovind will visit the Advanced Centre for Agricultural Research and Education (ACARE) and the Rice Biopark.

“These are both government of India projects funded by grants,” Gokhale said.

At the ACARE, Kovind will also launch a mobile app for agriculture technology.

After completing these engagements, Kovind will leave for Yangon where he will lay a wreath at the Martyrs’ Memorial which is also the resting place of Gen Aung San who was Aung San Suu Kyi’s father.

The President will also visit the Shwedagon Pagoda in Yangon and attend a community reception to be hosted by the Indian Ambassador to Myanmar.

On December 13, Kovind will visit the Shri Kali Temple in Yangon and the mausoleum of the last Mughal ruler Bahadur Shah Zafar.

He will also inaugurate the “Enterprise India” exhibition being organised by Indian industry body CII to showcase Indian manufacturing capabilities and industrial technology.

Later in the day, the President will visit the Dhamma Joti Vipassana Mediation Centre.

Kovind will return to India on December 14.

Press Secretary to the President Ashok Malik said that this will be Kovind’s last state visit this year and also the first state visit to a country with which India shares a land border.

“All three members of this delegation are parliamentarians from the states of Northeast,” Malik said.

“It is a tribute to the government’s Act East Policy and and the centrality of the Northeast in that.”

India has been increasing its engagements with Southeast Asia under New Delhi’s Act East Policy.

India is also a key development aid partner of Myanmar and is working on some major infrastructure projects in that country, including the India-Myanmar-Thailand trilateral highway and the Kaladan multimodal transport project connecting Sittwe port with Mizoram.

“In the past three years, political, economic and defence ties with Myanmar have grown rapidly,” a statement issued by the External Affairs Ministry earlier regrading Kovind’s visit said.

It stated that Kovind’s visit was expected to maintain the momentum generated by Prime Minister Narendra Modi’s visit to Myanmar in September 2017 and the visit of Suu Kyi to New Delhi in January 2018 for the India-Asean (Association of Southeast Asian Nations) Commemorative Summit.