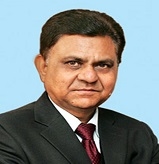 Bureaucracy Updates
August 6, 2015August 6, 2015 sarkarimirror
Jaipur:Rajasthan cadre retired IAS officer Lalit K Panwar has been appointed the chairman of Rajasthan Public Service Commission (RPSC).The Department of Personnel (DOP) issued the order stating that Panwar’s term would begin with his joining as Chairman of the RPSC.
Panwar was Secretary in Ministry of Tourism,Govt of India. Earlier, he had been Special Secretary to the then Rajasthan Chief Minister Ashok Gehlot. The appointment of Panwar is seen an effort of Raje government to clean up the image of the commission, which was tarnished after his predecessor Habib Khan Gauran was booked in on of the paper leak cases.