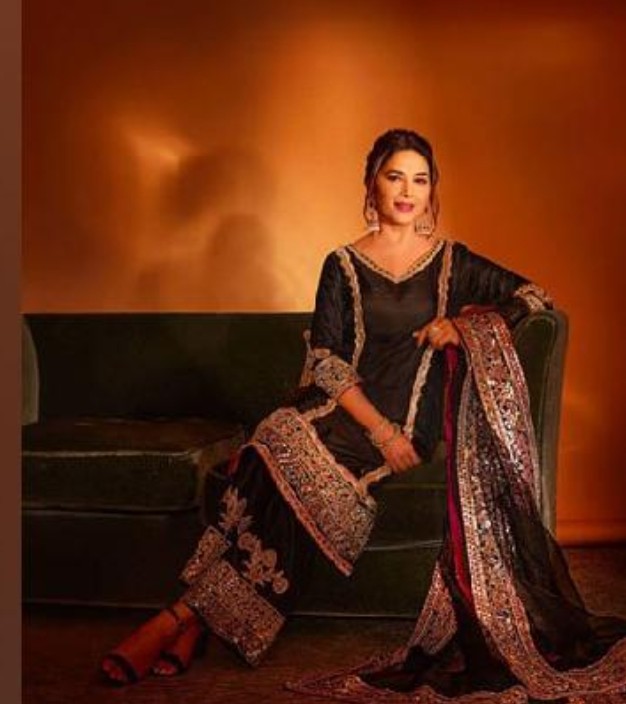 The ‘Dhak-Dhak’ girl of Bollywood, Madhuri Dixit Nene treated her fans with drop-dead gorgeous pictures of herself from a recent photoshoot on Thursday.

Slaying in shades of black, the 53-year-old was seen exuding elegance in a Manish Malhotra traditional embroidered suit with heavy lace detailing on it. The ‘Dil To Pagal Hai’ star shared a series of pictures featuring herself where she can be seen sitting on a sofa while posing for the lens.

In the pictures, Madhuri is seen effortlessly carrying the beautiful black straight suit with matching high heel stilettos. To complete the look, she accessorised her outfit with beautiful Indian jhumkas and bangles. Skipping neckpiece, she complemented the look with a messy low bun hairstyle and minimal makeup look.

With the post in which Madhuri is seen flaunting her million-dollar smile, she wrote, “Shades of black,” with a black heart emoticon.

The post garnered more than 1 lakh likes while scores of fans chimed into the comments section and left fire and lovestruck emoticons. The celebrity fashion designer Manish Malhotra also left heart emoticons in awe of the stunning picture.

Meanwhile, on the work front, Madhuri was last seen in the movie ‘Kalank’, in which she co-starred along with Sonakshi Sinha, Alia Bhatt, Varun Dhawan, Aditya Roy Kapur, and Sanjay Dutt.

She will be next seen in the third season of the dance reality show ‘Dance Deewane’ as a judge with Dharmesh Yelande and Tushar Kalia from February 27, this year. (Courtesy: ANI)