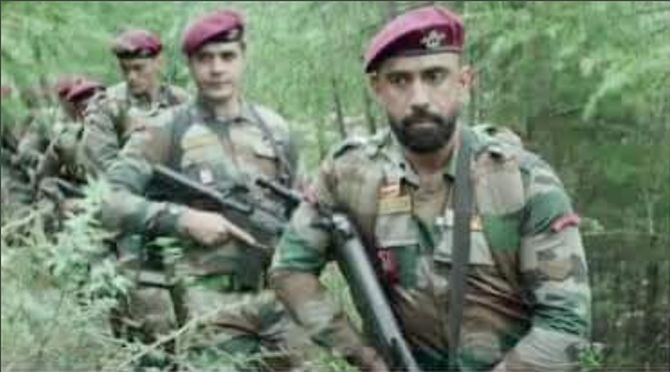 Like in war to be successful as an actor you have to be properly equipped says actor Mohommed Ali Shah and much more in an exclusive interview with our Editor-inChief Tarun Sharma.

This Friendship Day was especially different for many reasons! This may the first time this day of celebration of friends, friendship and bonding was celebrated by being away from friends in the safety of one’s own home. But there was still something to cheer one on. 30th July was not only celebrated as Friendship Day, it saw the release of a long pending movie YAARA about four friends, and a web series AVRODH based on the Balakot Surgical Strikes!

Yaara is a story of four friends and their tryst with the world of crime who are chased for decades by a police officer played by Legendary actor Naseeruddin Shah‘s multitalented nephew, Major Mohommed Ali Shah. This Indian Army Veteran- turned IIM Graduate – turned CEO – turned Actor has also played the role of a Para Commando in the much talked about webseries AVRODH, as Naik Irfan Khan which he very modestly declares wasn’t very difficult to portray since he had already served as a soldier in the Army. But the authenticity with which he has played the short yet significant role has charmed viewers across all sections!

The entire movie plays out through the eyes of this Indian Army Veteran, who is a Motivational Speaker/ Defence and Strategic Expert on TV Panels in real life all rolled into one! He can be seen portraying the role of a “Sutradhar” in National award winning film maker Tigmanshu Dhulia’s upcoming film “YAARA“. This film stars Vidyut Jamwal, Shruti Hasan, Amit Sadh, Vijay Verma, Kenny Basumatary and Major Mohommed Ali Shah in the key roles.
Tigmanshu Dhulia was impressed  by his presence on screen in Vishal Bhardwaj’s film “HAIDER” which won 5 National Awards. He played an Army Major in the film Haider in a crucial scene , but was quite unrecognizable. It is indeed interesting to watch him in a meaty role in the film YAARA which is streaming on Zee 5!

As one can see in the two pictures, the movie shows the transformation of Ali, into roles as diverse as a Para Commando Irfan Khan Pathan and the character of Jasjit Singh, a Sikh gentleman. The army veteran turned IIM Graduate turned CEO devoted more than two and a half years of his life completely towards intense  preparation for his role of Jasjit Singh and totally immersed himself into the character; as most people say ,and as is visible in the pictures, became unrecognizable once again.
He calls his role in the film YAARA his dream role since this role gives him a chance to display his talent as an actor perfectly! He plays the part of a character which is very contrary to his personality – He plays this Sikh police officer who ages over two decades in the film. From a young new IPS officer to ageing on towards retirement as the Jt. Director CBI.

A lot of actors are more concerned about how they would look. But this “Major” actor choose to look the part, the role, rather than to look good.
When he was preparing for this meaty role in the film “Yaara”, he grew his hair for real over a long time and learnt to tie a turban himself, gave up smokimg completely, read the Shri Gurugranth Sahab Ji, spent a month in the Goden Temple doing volunteer seva.
What not did he do to get this role right – I guess actors from a hardcore Theatre background want to be a master craftsmen of their trade.

1) He being a chain smoker gave up smoking at the drop of a hat, the day he signed the film, since Sikhs don’t smoke.

2) He actually grew his hair and beard for a couple of years and learnt to tie the 6 metres turban.

3) He spent a month in the Golden temple in Amritsar doing seva – He Would broom and sweep the floor, clean the dirty utensils, serve food, make tea and much more! He learnt to speak Punjabi even though he was told there is no requirement of that. He Completed reading the Shri Guru Granth Sahib Ji ( The english version).

4) He Would spend hours and hours to rehearse and rerehearse his lines and scenes obsessively.
What is amazing is that while most actors crave recognition, here us an actor who spent almost three years in intense preparation for a role where he is unrecognizable, and that role thrills him! Here is a rare craftsman who has never tried to peep from his character to show his face. He rather look and behave the character than have the urge to be recognised, he want to be recognised for his hardwork than just for a God blessed personality which he has abundantly inherited from his parents.

He has clearly worked extremely hard and gave it all that he had. Certainly this film will find the much deserved appreciation from audiences and critics alike, and bring for Major Mohommed Ali Shah too, the much awaited recognition for the undivided efforts he put into this role.

Major Mohommed Ali Shah is also the most sought after International TEDx speaker who has given the highest no.of TEDx talks not only in India but in the world. Of late, he has been continously working and delievering back to back motivational sessions on dealing with the Corona virus situation to millions across the globe which has uplifted many people in their trying times!

As a motivator and a Speaker he specialises in converting one’s negatives into positives, disadvantages into advantages, liabilities into assets, darkness into light, weaknesses into strengths. He is also a political analyst, a Defence expert and a Defence analyst on many popular Indian News Channels.
He is also an allumni of the prestigious IIM Calcutta and has done Theatre with Thespians such as Tom Alter and Naseer Uddin Shah ( who incidentally is his father’s younger brother). His father has served as the Deputy Chief of The Army Staff and also is the former Vice Chancellor of The Aligarh Muslim University and is currently the Pro Chancellor of the Prestigious USTM and has been a member of the board of Welhams boys school and IIM Lucknow.

Major Ali joined the Short Service Commission in the Army to train as a ” Commando” and was posted at the Indo – Pak border at the line of control as a young Lieutenant. He was awarded a commendation card for his exceptional and meritorious service to the nation for being unmindful of his own personal safety and going beyond the call of duty while serving with the ‘ Assam rifles” in the North East. He served as ADC to GOC 3 Corps in the North East and also speaks fluent Nagamese!

Major Mohommed Ali Shah has acted in FTII alumnus Shriram Raghavan’s “Agent Vinod”, and in Vishal Bhardwaj’s “Haider” which won 5 National awards apart from from several other prestigious film awards. He has also acted in acclaimed filmmaker Jahnu Baruah’s ” Broken window” produced by Priyanka Chopra. Incidentally and interestingly most of the film makers Shah has worked with are national film award winners!