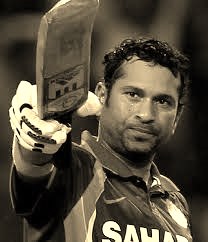 The Master Blaster Sachin Tendulkar , who retired two years ago, fulfilled the wishes of children battling life-threatening conditions at the MIG Cricket Club in Bandra by celebrating his 43rd birthday with them . The event was facilitated by Make-a-Wish India.

“These children had told us that they wanted to meet Sachin. So, we approached Mr. Tendulkar, proposing a cricket match on his birthday and he obliged,” said Deepak S Bhatia, CEO, Make-A-Wish India. It was not a cricket ‘match’ per se. It was a game of cricket wherein every child got a chance to bat and bowl.

“For over two hours, Tendulkar harboured a rapt group of learners as he taught the children the basics of batting, bowling and fielding, ranging from how to hold a bat to the various kinds of shots,” said Pranav Trasy, the General Secretary of MIG Cricket Club. “He is a kind man. He engaged with each and every child present, inquiring about their conditions and how they are coping with the same,” said Mr. Bhatia. Mr. Tendulkar also cut his birthday cake with the children and signed souvenirs for them.

The former Indian captain also launched a compilation of 17 stories under the title Wish Impact Stories Book. The compilation documents stories of 17 children with similar medical conditions who had their wishes granted, completed their medical treatment and are now engaged in schooling, as any other child.

According to a 2011 Wish Impact Study that surveyed parents, health professionals, and volunteers, a wish come true empowers children with life-threatening medical conditions to fight harder against their illnesses.

Nine fans, in their twenties, of the cricket legend also turned up at the venue to watch their favourite sports star in action.