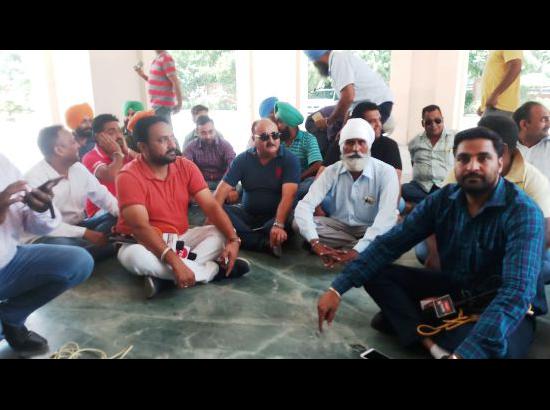 Ferozepur June 25, 2018: Members of Press Ferozepur Club sat on dharna in front of SSP office to register protest for not arresting the accused in the murder of Girdhari Lal JE PSEB -brother of Bobby Khurana senior reporter of FASTWAY despite assurance by IG,  SSP and SPH.

Girdhari Lal was murdered on March 18, 2018 by mixing something in the cold drink and it is more than three months that no accused has been arrested in this case, in spite of the fact that Videographic evidence of the statement of Girdhari Lal before dying given to the police in CD format, naming the accused, none of the people have so far been arrested by the police.  Not only has this, without calling the complainant family in this case, the IPC Section 302 been converted into 306.

It is very unfortunate that SSP SPH did not attend the office today.  Despite reporting by CID official’s minute-to-minute activity of dharna, none of the officers bothered to invite the protesters for a dialogue.

Mandeep Kumar President Press Club said the protest will continue tomorrow in an intensified manner, till the arrest of all the accused in this case.

The members of Press Club of other districts will also be invited to associate in the protest, he added.

While Chairman Chandigarh-Punjab Union of Journalists M.LTiwari joined the protest in support today, the Technical Staff Union of PSEB also confirmed to participate in dharna tomorrow, he further added.