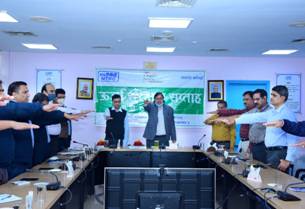 The Ministry of Power iscelebratingEnergy Conservation Week under Azadi Ka Amrit Mahotsav from 8th to 14th December 2021. Various activities are being undertaken by Power CPSUs  as part of the celebrations.

The Bureau of Energy Efficiency has been organizing National Level Painting Competitions on Energy Conservation for school children. This year, the theme for the competition is ‘AzadikaAmritMahotsav: Energy Efficient India” and ‘AzadikaAmritMahotsav: Cleaner Planet’. The State level painting competition will be organized from 1st to 10th December 2021 in all 36 States and Union Territories of the country, and it will culminate to a National Level Painting on 12th December 2021 at New Delhi. The winners of the National level competition will be awarded on the occasion of National Energy Conservation Day, December 14th.

NTPC Energy Efficiency Management Group (EEMG) started the week with various activities including pep talks, walkathons, pledge by employees, contractual workers at various areas of the plant.The main attraction of the day was the Street drama which NTPC Bongaigaon conducted in association with the NSS wing of Central Wing of Technology (CIT), Kokrajhar. Young engineering students of various streams performed the half an hour play in the busy market area of Salakati, Kokrajhar. The skit primarily focused on various aspects of energy conservation including highlighting NTPC’s role in preservation and restoration of natural resources.

NTPC Talcher Kaniha commenced the ‘National Energy Conservation Week’ yesterday. Various events like painting competitions, slogan, collage and quiz competitions have been planned for students, employees, their family members and at nearby schools, during the week long event.

As a part of ‘Azadi ka Amrit Mahotsav’, NHPC organized a free medical camp in association with Metro Hospital, Faridabad at NHPC Corporate Office yesterday under planned mega medical camps being held across various NHPC locations during the week.

NTPC Bongaigaon, Salakati, Kokrajhar is going to organise a North-East Festival under Azadi Ka Amrut Mahotsav on 11th-12th December at its outdoor stadium. The event is going to showcase the rich cultural diversity of Northeastern States through string of events which includes dance forms of Assam and Northeastern States.