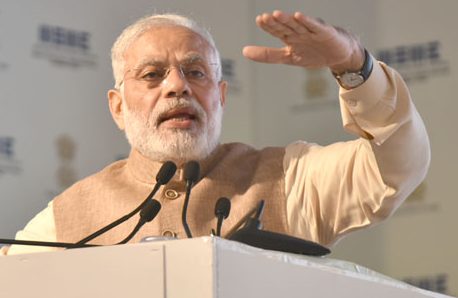 State
December 12, 2016December 13, 2016 sarkarimirror MOBILE PHONE SAVES PM MODI DAY AS POOR VISIBILITY PREVENTED HIS LANDING AT A PARIVARTAN RALLY IN UP & HE ADDRESSED THE RALLY THROUGH MOBILE

A mobile phone saved the day for Prime Minister Narendra Modi on Sunday after poor visibility prevented his helicopter from landing at Bahraich in Uttar Pradesh where he was scheduled to address a parivartan rally.

Since the IAF helicopter was unable to land in the dense fog at Bahraich on the Indo-Nepal border, Mr Modi returned to Lucknow and addressed the rally via his mobile phone from the State capital. He once again used the instance to promote mobile banking, saying “You can turn your mobile into your bank.” He however added that learning to do so was a slow process.

“Thank all those who joined the Bahraich rally in this weather & regret my inability to be with the people,” he later tweeted.

BJP U.P. chief Keshav Prasad Maurya held the phone to the mircophone at the rally venue as the Prime Minister’s voice crackled on it. “The PM will try to come again to Bahraich when his schedule and weather allow,” Mr. Maurya, a Phulpur (Allahabad) MP explained to the crowd.