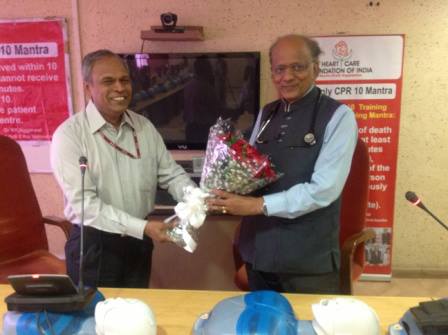 Inaugurating a series of cardiac resuscitation workshops for employees of Mahanagar Telephone Nigam Limited, Mr A K Garg, Chairman and Managing Director, MTNL, said that the organization plans to provide training in cardiopulmonary resuscitation 10 (CPR 10) to all its employees.

During its first session conducted in two batches in the Company’s Corporate Office at CGO Complex, New Delhi where about 800 employees attended, Shri Garg said that CPR 10 can revive a dead person within the next ten crucial minutes. It is effective in all kinds of sudden and unexpected deaths, and more so in deaths caused due to electric shock and cardiac arrest. Mr Garg said that it is a very important for its employees to learn because of the reason that many times they have to work in close proximity with electrical wirings and installations in Exchanges and at customers premises.

Conducting the practical workshop of CPR 10, Padmashri & Dr B.C. Roy National Awardee Dr. K K Aggarwal, President, Heart Care Foundation of India, said that one does not need to have a medical degree to learn and practice CPR 10: any by-stander can revive a person within ten minutes of a clinical death. Dr. Aggarwal said that the Foundation has named this as “Savitri CPR 10 Mantra”, and as per this mantra – “within 10 minutes of death (the earlier, the better), and at least for the next 10 minutes (the longer, the better), compressing the centre of the chest of the victim with a speed of 10×10 i.e. 100 per minute” by any by-stander / on-looker can bring back the victim from the jaws of death, rather than wailing about the misfortune ! Translated to Hindi, this mantra is – “marne ke dus minute ke andar, kam se kam dus minute tak 10×10 = 100 prati minute ki gati se, apni chhati peetne ke badle mare hue aadmi ki chhati peeto”.!

Mr Garg also announced that with the assistance of Heart Care Foundation of India, MTNL shall be launching a free telephone ring tone which can be downloaded by subscribers on the phone, that will provide step by step instructions on how to revive a person after sudden death.